A money bag
Frostbite Caves - Day 1 is the first level of Frostbite Caves in Plants vs. Zombies 2. There are the two frozen Wall-nuts, one in the second and one in the fourth lane in the sixth column. There is also a slider pointing down in the first lane and a one pointing up in the last lane. When this level is finished for the first time, the player unlocks Hot Potato.

(Crazy Dave and Penny appear)
Crazy Dave: Brrrrr. It's colder than a polar bear eating an ice pop!
Penny: Indeed. It appears we have arrived in the Frostbite Caves.
Crazy Dave: We've traveled so far back in history ... we've arrived in PREhistory!
Penny: A historic moment indeed, User Dave. But more importantly...
Penny: My sensors indicate there is an ice floe on the lawn.
Penny: Data suggests it will block both plants and zombies.
Penny: Though I predict zombies will find a way around it.
Crazy Dave: Don't worry. We'll plant wisely and stop those zombies COLD!
(Crazy Dave and Penny leave)

As with all worlds, the first level is one of the easiest ones. This level is excellent for experimenting with different strategies, as endless amount of combinations will work for this level.

There is no threat of frozen winds and Hunter Zombie yet, so the player does not need to worry about having their plants frozen and using thawing plants.

The only frozen blocks in this level are the frozen Wall-nuts. They are not essential for completing the level. Furthermore, the player will only be able to unfreeze them by dealing damage to them, as Hot Potato is not unlocked until beating the level.

As this level is relatively easy, almost any plant combination works on it. However, it is still best if the player makes use of the Ice Floes and plant plants that do damage to other lanes there. The player can also plant fire plants near the Wall-nuts as to melt the ice faster, but it is optional as it will break due to damage anyways.

The Ancient Egypt Strategy by Snapdragon717 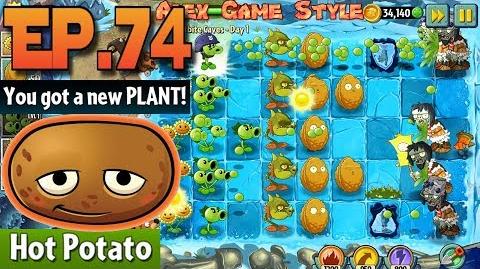 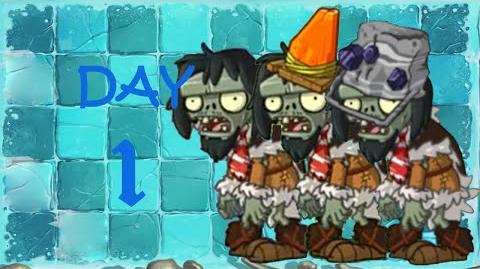 Frostbite Caves Day 1
Add a photo to this gallery

Retrieved from "https://plantsvszombies.fandom.com/wiki/Frostbite_Caves_-_Day_1?oldid=2357654"
Community content is available under CC-BY-SA unless otherwise noted.