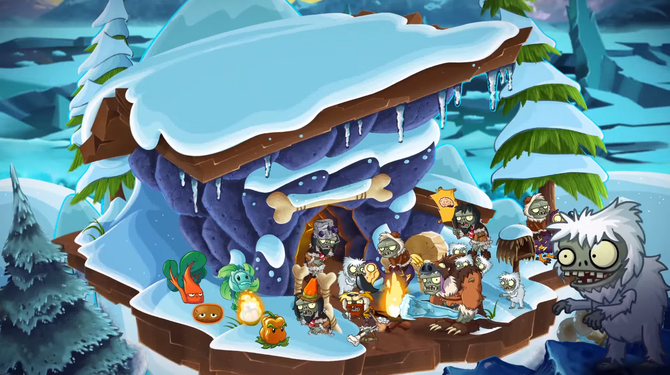 Frostbite Caves is the 4th world (7th world released chronologically) in Plants vs. Zombies 2 that takes place in an ice age. Its new special sneak peek Piñata Parties started on January 6, 2015, with the release of the new gem premium plant, Hurrikale. It introduces new zombies, such as Hunter Zombie, Dodo Rider Zombie, Troglobite, and Weasel Hoarder.

It appears the scene takes place at the Player's House which is a cave that's been outfitted to serve as a home. On the zombie side of the lawn there is a giant cave shaped like a zombie head made of ice, and there are also two mammoth tusks with one of them being broken.

The environment modifiers of this world are slider tiles, chilling winds and the surprise attack "Snowstorm!". Slider tiles are ice blocks that float on tiles with water and have a zombie hand frozen inside with its index finger pointing either up or down. This finger determines the lane the zombies that get in contact with it will go towards. (A finger pointing up means the zombie goes to the lane above it. Same mechanic applies to the finger pointing down.)

Chilling winds appear randomly during the level, partially freezing plants and they can eventually leave the plant completely encased in a frozen block, which renders the plant useless and also behaves similar to a tombstone. Finally, "Snowstorm!" is a surprise attack which is similar to the "Sandstorm!" surprise attack in Ancient Egypt. Zombies will come directly onto a tile, even behind a slider tile, then continue moving. Zombies that come in by the snowstorms are not affected by the slider tiles.

Besides the things mentioned above, there will sometimes be available plants, zombies or both that are frozen in the lawn from the beginning in some levels. The player can release them by using thawing plants, such as Hot Potato. There is also a new Power Up called Power Flame that replaces Power Snow and is exclusive to this world.

A trait unique to this world's zombies is that they can not be frozen, but can only be chilled by certain plants like Iceberg Lettuce, which normally freezes zombies but here it only chills them.

Frostbite Caves takes place during the last Ice Age, due to the fact that the zombies in Frostbite Caves show features of Homo neanderthalensis. Since the last Neanderthals died out 40,000 years ago, the world probably takes place at least 40,000 years ago (however, the name of the Zombot implies the world takes place only 12,000 years ago). It is the second world in which the zombies explain an important biological decline with uncertain explications after the Dark Ages, in which the sociological and biological decline of the time period is explained.

Explore the frozen wastes of prehistory and chill out with the coolest zombies ever. Beware the winds or your plants will be frozen veggies.

Once the player obtains the key in Wild West - Day 25, they will gain access to Frostbite Caves.

When the player beats Day 15, the player receives a stone tablet with cave zombie's drawing on it. The waves of Sloth Gargantuars on Day 16 are then defeated.

On Day 30, Dr. Zomboss asks the player if the journey for the taco is a trick or a trap. Once the player defeats the Zombot Tuskmaster 10,000 BC, Crazy Dave and Penny showed up to tell the other reason they travel through time. However, before they could mention it, Dr. Zomboss shows up declaring he's not yet defeated, and will stop speaking in third person. He then flees.

+ denotes a zombie that does not always appear.

^ denotes a zombie that does not appear on its own.

It is playable on Days:

Icebound Battleground is the Frostbite Caves', Endless Zone. The entire level itself is more challenging than the ordinary levels as one may not know when the level will have a three or four-flag level. As the player progresses as well through the higher levels, freezing winds may occur more often and may instantly freeze the player's well-defended columns. Each level has random frozen plants or zombies, and the slider tiles also change repeatedly.

Zombot Tuskmaster 10,000 BC is the boss of Frostbite Caves. It is encountered in Day 30. Normally, it is a conveyor-belt level, with the given plants and the zombies it summons. This Zombot, unlike most of the traditional ones, does not have a rush attack. Instead, it will call a two-lane or three-lane freezing wind to freeze the plants. It also creates a column of ice blocks to not only protect itself but also summon zombies. No Plant Food is given in this battle.