Frost Rose is the Rare ice variant of Rose. She was first teased in an image posted on Twitter during Christmas of 2015. Like all the other ice-based characters, Frost Rose sacrifices some of her damage in exchange for a freezing ability. Once an enemy is hit by Frost Rose's projectiles, they will become chilled, causing them to suffer from a slight movement speed penalty and to gain a blue, frosty visual overlay. If Frost Rose hits a target multiple times in a quick succession, she will freeze the enemy solid, fully immobilizing them and preventing them from using any abilities. Frost Rose's primary weapon is also semi-auto compared to other the other Rose variants. She was revealed in a live PopCap stream, where she is revealed that she can charge up attacks like the Future Cactus.

"Frost Rose once rode a majestic Yeti Chomper into battle. The resulting victory was so convincing that the mere whisper of it makes Zombies shake in their boots."

Hold down fire to charge her icy shots. The longer you charge, the quicker your enemies will freeze!

Frost Rose's primary weapon is the Wand of Freezing. It is a chargeable, single shot weapon that deals 7-50 impact and critical damage depending on the charge rate.

Frost Rose takes her support role further than all of the other Roses, with her main weapon being capable of low damage while freezing zombies with the final charge. It is a force to be reckoned with if you are with an ally that has high damage output, but has trouble hitting most moving targets, such as Agent Pea. Alone however, you will find yourself in trouble if you don't freeze your enemy in a 1v1 since your damage is low for the commitment you have to do compared to the other Rose variants, so stick with the team and let them do the damage for you. Before you get too overconfident and attack a Super Brainz  or All-Star , remember that even if you empty you entire clip you are only capable of dealing up to 140 damage if you don't charge your shots. It's best to attack faster and smaller classes while playing this variant , namely Imps and Scientists as the combination of homing, Time Snare, and Ice mean they are very easy to immobilize and take out, and you're doing your team a favor at the same time, as those are the classes tanks have the hardest time dealing with.

Because her projectiles move quite fast and very far, Frost Rose can also serve as a sniper. Keep your distance from the zombies, as her charge shots can travel quickly and deal a high amount of damage to them.

Alone, Frost Rose is more of an annoyance than a threat, since she has low damage and a small clip size. The most threatening thing about her is when she is combined with strong allies that can do serious damage in a short time frame, so if she is with an ally, take her out first before you end up being frozen in place, or else you will become vanquish fodder for her ally. Taking her out at long range is a wise decision, since its level three charge is difficult to aim without the assistance of its homing. 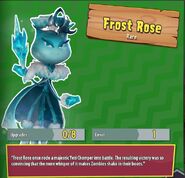 Frost Rose in the Stickerbook 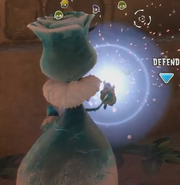 About to charge up 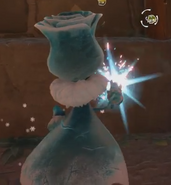 Retrieved from "https://plantsvszombies.fandom.com/wiki/Frost_Rose?oldid=2023794"
Community content is available under CC-BY-SA unless otherwise noted.