Frontline Flats is a map in Plants vs. Zombies: Garden Warfare 2, which was introduced in the Frontline Fighters DLC. This map takes place at the boundary between Suburbia and Zomburbia, presumably where Zomburbia continues to expand. Two cannons are found on this map; each cannon is found on their respective faction, perfect for getting First Strikes. This is also where Crazy Dave has a laundry washing business established, and Dr. Zomboss transforms the houses from Suburbia into living spaces for the Zombies.

Boxes found near houses on the Zomburbia side

A house that was crushed by a laundry ball

A billboard found on the Suburbia side 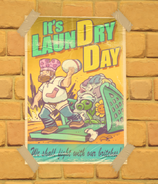 A poster found on the Suburbia side

Retrieved from "https://plantsvszombies.fandom.com/wiki/Frontline_Flats?oldid=2251207"
Community content is available under CC-BY-SA unless otherwise noted.