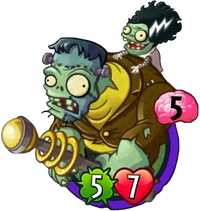 when a Zombie is destroyed.
IT'S ALIVE! IT'S ALI-I-I-IVE! Ok, strictly speaking, it's not alive.

Frankentuar is an event zombie card in Plants vs. Zombies Heroes and a member of the

every time another zombie is destroyed.

It was introduced in update 1.18.13 for the Lawn of Doom Weekly Event, along with Transfiguration, Go-Nuts, Template:PvZHLink, Haunted Pumpking, Ketchup Mechanic, Fraidy Cat, Sneezing Zombie, Exploding Fruitcake, and Unexpected Gifts.

It is based on Gargantuar's Lawn of Doom costume in Plants vs. Zombies 2.

Its name is a portmanteau of "Frankenstein," a novel written by Mary Shelley, referring to its appearance, and "Gargantuar," the type of zombie it is.

Its description is a reference to a famous quote by Victor Frankenstein, a young scientist who created Frankenstein (or Frankenstein's monster). But since Frankentuar is a zombie, it is undead.

IT'S ALIVE! IT'S ALI-I-I-IVE! Ok, strictly speaking, it's not alive.

Just like Valkyrie, this zombie gets a boost for every zombie destroyed. And due to that, a swarm deck is the ideal deck. Aside from glass cannons, zombies that make other weak zombies like Zombie's Best Friend, zombies that can destroy other zombies like Fireworks Zombie, and Final Mission can help you supply and destroy more weak zombies for the sake of boosting Frankentuar. However, you also need to hold on until you reach turn 5, so control cards and a few high-health zombies are also essential.

If you do not need to confront a particular threat, it is best to play Frankentuar on the rightmost non-aquatic lane to get the most out of its ability since zombies engage in combat from left to right.

Each hero has access to unique synergies and ways to assist Frankentuar:

But beware; just like Valkyrie, you are investing lots of cards just for Frankentuar to grow massive and do everything for you, and you will lose a lot of momentum if you lose the boosted Frankentuar. In fact, using Frankentuar is even riskier than using Valkyrie as Frankentuar needs to stay on the field to amass strength, whereas you can safely keep Valkyrie in your hand and unleash her when the time is ripe. Thus, it would be wise to save some cards in your hand, and pack late-game cards in your deck in case Frankentuar fails to finish your opponent off.

Frankentuar has massive stats (especially health) for a 5-brain zombie, and it will get even stronger as you destroy the constant flood of weak zombies that follows. As threatening as the swarm of zombies is, you should mainly focus on destroying, or heavily damaging Frankentuar. Since the most common placement for him is in the right-most lane, which is a Ground lane, you can counter him by simply using a Lawnmower (PvZH) for a "4 for 5" trade, or alternatively something such as the Shamrocket. 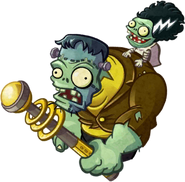 Lawnmower being played on Frankentuar

Frankentuar on the advertisement for the Weekly Events

Frankentuar on the aquatic lane 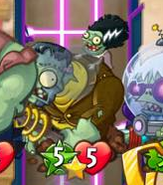 Retrieved from "https://plantsvszombies.fandom.com/wiki/Frankentuar?oldid=2180549"
Community content is available under CC-BY-SA unless otherwise noted.