When a Plant Trick is played, this gets +1

and moves to a random lane.
What's a black cat's favorite color? Purrrrr-ple.
Fraidy Cat is an event zombie card in Plants vs. Zombies Heroes and a member of the

and moves it onto a random lane when the plant hero plays a trick, unless it is destroyed by said trick. This ability stacks with each Fraidy Cat on the field and persists until all Fraidy Cats are removed from the field. Its closest plant counterpart is Black-Eyed Pea.

It is based on a cat, a small, typically furry, carnivorous mammal, commonly owned as a domesticated pet.

Its appearance is a visual pun on the real meaning of fraidy cat; a timid, easily frightened person, as Fraidy Cat is depicted as an actual cat.

Its description makes a pun, with the word "purple" purposely having many "r"s to mimic a cat's purr.

Fraidy Cat has good initial stats for its cheap cost, but it also has a really useful ability as every time the plant hero plays a trick, including most superpowers, it will get +1

just like Black-Eyed Pea; it moves to a random lane, too. This can make the plant hero think twice before playing trick cards like Flourish, Plant Food, Photosynthesizer, Spring Bean (unless it is played on Fraidy Cat), and 2nd-Best Taco of All Time; just to name a few. However, be careful, as Fraidy Cat is very susceptible to any damaging or instant-kill trick, namely Berry Blast, as all of them do at least 2 damage. If your opponent is a

Kabloom hero, boosting it may be a good idea.

Being in the pet tribe, it can benefit Zookeeper, which can boost the strength of all pets on the field (including it), and Cat Lady to boost her strength.

Frenzy cards like Possessed or Maniacal Laugh can allow Fraidy Cat to act like an Energy Drink Zombie that moves and gets boosted for each plant trick played. Since it is in the Beastly class, you can boost it with Vitamin Z to make it a dangerous threat. However, you want to be careful if you are using Area 22 on it as if a plant trick is played, it will move away from the Area 22, losing its stat boost and traits.

Fraidy Cat can be really annoying if you wish to play trick cards. If you can, try to avoid playing trick cards as it can be boosted and move to a random lane. However, there are some tricks that can put an end to it, such as damaging, destroying, or Bouncing tricks (or cards in general). In this case, feel free to play them on Fraidy Cat. You are also free to use environment cards like Spikeweed Sector to remove it early.

Since Fraidy Cat's stats are low if unboosted, any plant with 2

or more can destroy it.

You can use its moving ability to their advantage by playing a trick to purposely move Fraidy Cat onto another lane. This can allow powerful/useful plants to attack your opponent, activate their ability, or survive for that turn. If you are lucky, Fraidy Cat can also move to a lane where it can be easily destroyed. 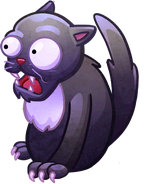 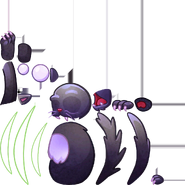 Lurch for Lunch being played on Fraidy Cat 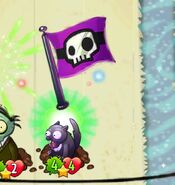 Galvanize being played on Fraidy Cat

Fraidy Cat with the

Devour being played on Fraidy Cat

Fraidy Cat with the

Fraidy Cat on the advertisement for the Early Access Bundle

Fraidy Cat being the featured card in the menu for the September 19th, 2017 Daily Challenge