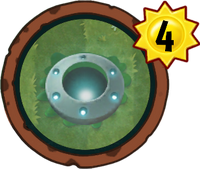 This article is about the card in the Galactic Set. For the entity that protects plants and zombies in Plants vs. Zombies 2, see Force field.

Plants here can't be hurt.
It's a force of nature.
Force Field is a galactic super-rare plant environment card in Plants vs. Zombies Heroes and a member of the

to play, and its ability shields all plants in it. This ability persists until Force Field is overridden by another environment.

It is based on Infi-nut's projector and Plant Food ability.

Its name is a pun on "force field," a fictional barrier made of energy, plasma, or particles often used in science fiction, and "field," a large area of grass or other vegetation.

It's a force of nature.

Unlike other cards that shield plants for only one turn, this allows your plants to be invincible until Force Field is overridden, or unless an instant-kill or stat-lowering card is played to destroy the plant. It is advisable to think carefully of what plant to play here, as you will be unable to replace them unless they are instantly destroyed or moved. This should be used on a lane with high-strength plants to keep them alive in addition to them doing high damage. This also synergizes well with Soul Patch; having him in Force Field prevents you from taking damage until Force Field is overridden or Soul Patch is destroyed by a trick. As Grass Knuckles, you can even use two Force Fields and then use two Umbrella Leaves to prevent your Soul Patch from being destroyed entirely, unless the environment is overridden, Primordial Cheese Shover is Evolved, Mondo Bronto activate their Dino-Roar, or Zombot 1000 is played.

It is not recommended to play plants with "When hurt" or "When destroyed" abilities such as Prickly Pear, Hibernating Beary, and Galacta-Cactus in this environment, as they need to be hurt or destroyed in order to be utilized properly. However, if Hibernating Beary already has a good amount of strength, then playing Force Field can be used to prevent it from taking any further damage that would otherwise have destroyed it.

Because of this environment's nature, it can make a plant invulnerable to damage infinitely until you play any environment to replace it. Therefore, it is futile to use sheer force, or even

Deadly zombies, against this environment. If you do not have an environment to replace it, instant-kill cards such as Weed Spray, Rocket Science, or Locust Swarm can still destroy the plants in it, while stat-lowering cards like Alien Ooze, Landscaper or Nibble can reduce their stats. Bouncing or moving them also work in dire situations if you don't have any other solution to this environment. You can also play Sumo Wrestler or Rodeo Gargantuar to move a plant out of Force Field so that plant can take damage. Since this environment is quite expensive to play, you can play a cheap one to remove it. Also, you can use

Striketrough to ignore the plants and still damage the Plant Hero. 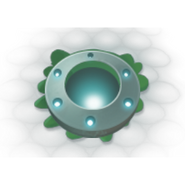 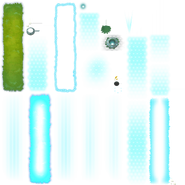 Force Field on the field