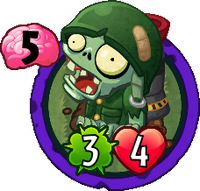 . They do not have any traits, and their ability does 3 damage to a selected plant or the plant hero when they are played on the heights. Their closest plant counterpart is Bluesberry.

Their name and appearance are based on the Foot Soldier, a zombie class from the Garden Warfare series.

Their description references how the Foot Soldier only wears one shoe.

Their ability is a reference to the fact that Foot Soldiers are commonly seen on rooftops and in high places in the Garden Warfare games, due to their Rocket Jump ability.

Each Foot Soldier Zombie shall be issued one (1) combat foot.

While having below average stats for a 5

zombie, Foot Soldier Zombie's ability to hurt any plant or your opponent and possibly finishing them off is a very handy thing to have. Using this ability against plants that activate their abilities on zombies on their lanes, such as Potato Mine and Guacodile, can render them useless if there is no zombie currently occupying their lane. 3 damage is also enough to eliminate threats such as Sportacus, Mayflower, and Black-Eyed Pea.

However, Foot Soldier Zombie's ability only activates when they are played on a heights lane. Therefore, their usefulness varies on the number of heights lanes on the field; the more, the better.

or more. You can lower their stats if you think you can handle them. If they get boosted, you can use Squash or Shamrocket to destroy them. 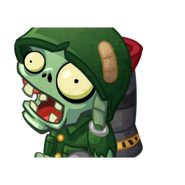 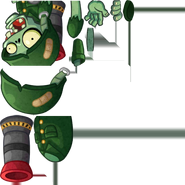 The prompt that appears when Foot Soldier Zombie activates their ability

Foot Soldier Zombie with the

Gigantic Foot Solider Zombie due to a glitch

The player receiving Foot Soldier Zombie from a Premium Pack 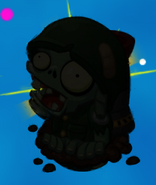 The player receiving Foot Soldier Zombie from a Premium Pack