Foot Soldiers are highly versatile attackers. They can hit targets at far ranges, provide cover, and eliminate the largest foes with their ZPG.
Foot Soldier is a playable Zombie class in Plants vs. Zombies: Battle for Neighborville. He is an

Foot Soldiers are highly versatile attackers. They can hit targets at far ranges, provide cover, and eliminate the largest foes with their ZPG.

Foot Soldier's primary weapon is the Z-1 Assault Blaster, which fires paintball pellets that deal 6 damage each (7 for crits) and fires at a rate of 550 RPM (rounds per minute). Foot Soldier can fire 40 paintballs at a time before needing to reload.

Foot Soldier is a good all-around attacker. His high rate of fire allows him to frequently hit the enemy. Rooted Plants, such as Peashooters in Pea Gatling and Sunflowers in Sunbeam can be instantly killed with ZPG. Just make sure to aim right, and as they can't move, they will get vanquished. If enemies try to get close to you, use Rocket Jump to evade their fire and possibly retreat. Rocket Jump can also be used to get you a height advantage and allow you to provide cover fire for your team. Stink Clouds can be used to help your team capture objectives by repelling opponents or damaging them while decreasing their vision.

Soldiers are not the best against small enemies, such as Acorn and Night Cap. They are hard to hit as it is, but with Night Cap's double jump and Acorn's Acorn Dash, they become very tricky foes. If possible, try to retreat and get backup, particularly an Engineer. If not, try to use Stink Cloud to encourage them to leave you alone or ZPG to damage or even vanquish them.

Equipping the Rapid Fire upgrade helps significantly in raising his damage per second output. This makes him more suitable for a "spray and pray" playstyle or a highly offensive attacker as you need to hold the fire button for the rate of fire to increase to its maximum.

One of the best characters to use against Soldiers is the Snapdragon. Snapdragons do massive damage at close range, where the Soldier will have no advantage. Snapdragon's Flame Blower can still hit the Soldier if he uses Rocket Jump, or if the Soldier tries to flee, Flare Ball could be used, or better, Blue Blazes. If the Soldier starts shooting you from far away, use Swoop Slam to get closer and Flame Blower to finish them off.

The Super Zombie Stink Cloud can hide you from Kernel Corns Butter Beacon if you stand in the cloud, it is useful for helping your team do a sneak attack in Butter Beacon. 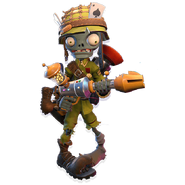 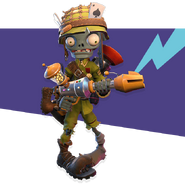 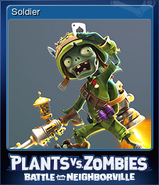 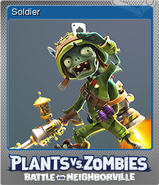 Retrieved from "https://plantsvszombies.fandom.com/wiki/Foot_Soldier_(PvZ:_BfN)?oldid=2349666"
Community content is available under CC-BY-SA unless otherwise noted.