For the version in Plants vs. Zombies Heroes, see Foot Soldier Zombie.

The Foot Soldier is easy to pick and play, making him a good class for beginners, yet in the hands of a skilled player, he becomes a force to be reckoned with and a menace at almost any range.

The Foot Soldier Zombie is always in the fight - armed with an array of the latest Zomboss tech he doesn't understand, but still manages to operate thanks to his Zomboss Academy Training. His speciality is taking out rooted Plants, claiming high ground via his rocket jump, and counting things.

The Z-1 Assault Blaster is the primary weapon of the Foot Soldier. The facts below apply to a fully upgraded weapon.

The Zomboss Rapid Reloader enables the Soldier to reload faster.

Zomboss rounds have been enhanced through application of small hard things on the outer shell.

The Foot Soldier's main advantage is his versatility. At close range, his weapon is extremely damaging with the Zombie Stink Cloud to aid his retreat. When things get rough, using Rocket Jump, following with a landing of a ZPG can catch his opponent off guard, and in most cases, vanquish them. The player can also choose to use Rocket Jump to a near high point and attack the plant from above, causing confusion for some moment. However, try to stay out of side of Chompers, unless your Rocket Jump is ready and there's a roof nearby, in which case, bait the Chomper, Rocket Jump to the roof, and vanquish the Chomper. Since the latter's weapon is melee-based, it will be rendered completely helpless.

The Foot Soldier also makes for a good sniper, as the Z-1 Assault Blaster has an accurate crosshair. He also deals good damage at long range. Furthermore, his ZPG can instantly take out an unaware plant. His Zombie Stink Cloud, when aiming up and jumping, goes a decent distance so it can be used to cover objectives when the Soldier is far away. He can also use it to flank himself since the Stink Cloud obscures vision. However, what makes him a capable sniper is his Rocket Jump. It gives the Soldier the highest boost in height, surpassing the Peashooter's Hyper. This makes it common for Soldiers to appear on rooftops, so plants should always keep one eye on the sky, or else they will be vanquished quickly.

However, the Foot Soldier has a few flaws to go with his numerous advantages. His primary weapon is somewhat inaccurate up close, and that multiple plants can quickly overwhelm him. His Rocket Jump only gives one height boost, so if the player accidentally slides down, it will be 20 seconds before they can jump back up again. The ZPG, while very powerful, has a lot of startup time, making it not the best choice in close quarters. His Zombie Stink Cloud, while flanking his position, also covers his and his teammates' vision.

Nonetheless, the Foot Soldier's pros outshine his cons, and he is considered a very good character by a lot of players.

The Foot Soldier has a devastating instant kill explosive, the ZPG. This weapon is best used for dispatching of rooted plants, such as Sunflowers or Peashooters using their Sunbeam, Pea Gatling, or even Cacti using their drones. The Zombie Stink Cloud is best used for covering major objectives, making it harder for plants to defend them, as well as escaping a tight situation. Use Rocket Jump to gain vantage points by supporting your teammates while also making yourself a small target. The best use for the Foot Soldier is to provide support by vanquishing rooted plants from afar. In Gardens & Graveyards and Taco Bandits, the Foot Soldier should sometimes use its stink cloud on annoying Spawnable Plants at a distance (such as the Bamboo Shoot and the Scaredy-shroom) as it temporarily disables the Spawnable Plants allowing the zombie team to pass. Be sure to also keep on the lookout for Cactus drones to shoot them down in order to prevent any lethal Corn Strikes from being performed against your team. 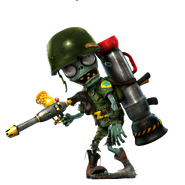 A render of Foot Soldier 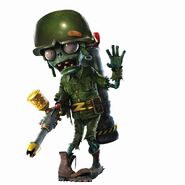 Another image of the Foot Soldier 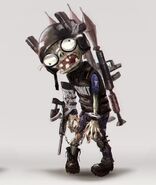 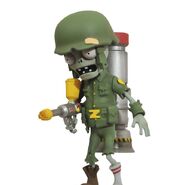 All weapon skins
Add a photo to this gallery 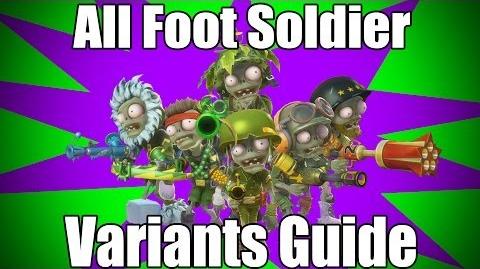 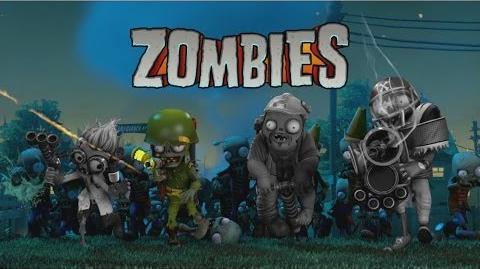 Retrieved from "https://plantsvszombies.fandom.com/wiki/Foot_Soldier?oldid=1265245"
Community content is available under CC-BY-SA unless otherwise noted.