Smashes all the plants and fires Flying Imp to the ship.

Smashes all plants and throws Imps on the ship

Because of his huge size occupying more flight pathways, he was forced to pay 3 times the travel fee. He was very angry at this and said "I just want to become a carefree imp." Then he looked at his empty wallet and said: "But only sometimes."

There are differences between it and other Gargantuar variants (namely its speed, attack method, and having two Imps instead of one.) It will throw the Imps to the first column unlike a Transport Boat and normal Gargantuars. It does not attack ground plants, but can throw Imps to eat plants backwards and any aerial plant that touches it will be crushed. Once it reaches the base, it will attack the home ship until it is destroyed.

Flying Gargantuars are even more difficult to deal with in these levels than Gargantuars from other areas due to the limited space and mechanics of this world, leaving limited space for powerful ground plants. They have two Imps instead of one and will throw them facing backwards, which will inevitably destroy the player ground defenses and sun production due to the fact that there is no space for backwards shooting plants and there are no aerial plants that do so. It will also smash all aerial plants it encounters, killing them in one hit. Once it reaches the edge of the player's sky castle, it will start smashing it until it gets destroyed. They also have higher attacking power than most zombies that appear in Sky City and multiple Flying Gargantuars smashing the sky castle can make the player lose in around 10 to 20 seconds if left undefeated. And as the screen is usually clogged by zombies that are of similar color to them, the player may not be able to notice them coming before it is too late.

Do not rely on ground plants to take care of this zombie as despite the Gargantuar cannot attack ground plants, they will most likely be eaten by the backwards faced Imps they throw. Do not rely on aerial plants either as they are low in attack power and will fail to stop the Flying Gargantuar from attacking your base. Use Saucer Squashs to delay them as much as possible and bombard them with powerful Plant Food attacks from the player's ground plants (such as Bowling Bulbs and Magic-shrooms). Alternatively, use the Plant Food on costumed Hypno-shrooms planted in the back row, which will transform the thrown Imps into hypnotized Gargantuars which can destroy the non-hypnotized ones. Cycloques also help as they can stun the Flying Gargantuars and kill the low-health zombies nearby.

A Flying Gargantuar boss will appear every once a while and will drop 3000 sun and lots of points when defeated. Keep in mind that it has a lot of HP, though all the zombies will flee before it appears on the player's screen. Do not use the homing cannon as it does not generate enough power, even though it will always land a hit on the Flying Gargantuar. An easy strategy to defeat it is to use the regular cannon as your mode of attack, since it has the lowest sun cost and deals the highest damage. Furthermore, it is the only zombie present when its wave starts, guaranteeing damage dealt when targeted.

These zombies will only appear in the advanced stages of these Brain Busters and are easier than you think. They do not shoot bullets but touching them will be fatal. Stay as far as possible and keep shooting until it dies. Once it reaches the other side of the screen, it will disappear. Sometimes two will appear two different rows, and if this happens take care of one of them and let the other one pass through, as usual plants cannot take care of two Flying Gargantuars fast enough. Of course, if you use a plant from the multi-directional team, such as Starfruit, you can take care of both. 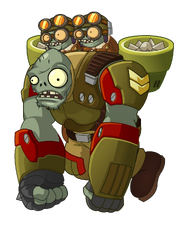 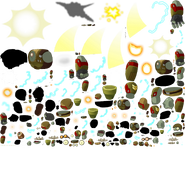 Sprites and assets
Add a photo to this gallery

Retrieved from "https://plantsvszombies.fandom.com/wiki/Flying_Gargantuar?oldid=2351895"
Community content is available under CC-BY-SA unless otherwise noted.