Flowers are a type of environment modifier that form a part of some levels in Plants vs. Zombies 2. The player must not let the zombies trample the flowers at all costs, because they will cause the player to lose the level since the 1.7 update (or not get a star from version 1.6 and below but the game allows you to continue) if the zombies manage to. Also before the said update, when a level is successfully completed without the flowers being trampled, the player would get a star. After the 1.7 update, they are present in some levels as an obligatory and additional objective in order to pass the level. The levels with this objective present state the rule "Don't let the zombies trample the flowers."

On a level which the objective is not to trample the flowers, the player should plant more defensive plants and also instants, like Cherry Bomb. Plants that explode in a 3x3 area are useful because it can be a last-second approach of not letting the zombies trample the flowers. Grapeshot is a great choice in these kind of levels, as its explosion not only kills all the zombies in 3x3 area that are approaching the flowers, but also sends out projectiles to hurt and possibly kill more.

Defensive plants, especially high health ones like Tall-nut are vital to beat levels like this. The player could plant Tall-nut or other defensive plant at the right of the flowers, so the zombies would be blocked from trampling them. Chard Guard is also useful in levels like this, because although its health isn't high, you can use it to knock zombies back away from the flowers. But when the Chard Guard loses all its leaves, you will have to plant another Chard Guard in its place (or you could just put an Aloe behind it). Infi-nut can also prove useful in this level, as its force field can block all the zombies on each lane from trampling the flowers. However, once the force field is gone, the Infi-nut is just like any regular defensive plant, and the zombies will be able to advance to the flowers again. If the flowers are on a tile instead of between tiles, you can plant Spikeweed or Spikerock on the flowers and it will not count as a failure if zombies step on the Spikeweed or Spikerock. If the level is very fast-paced, use Primal Wall-nut to set up defenses quickly.

Slowing plants or stalling plants like Stallia, Iceberg Lettuce, or Winter Melon are useful in these kind of levels because the zombies will walk slower to the flowers, giving more time for the player to build up their defenses.

Avoid using plants that can bounce zombies back spaces, since it is possible for them to land on the flowers, instantly trampling them. 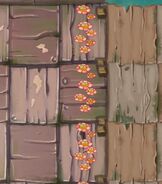 The Flowers at the start of the level in Pirate Seas 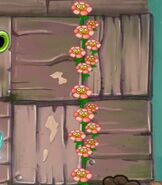 Flowers on stage after successfully completing the level

Flowers worried when a zombie is about to trample them

Flowers when a zombie tramples them

Losing screen that shows when the player lets a zombie walk over the flowers (from version 1.7 onwards). Note that the brain still appears, despite the fact that the zombies did not eat the player's brains.

Retrieved from "https://plantsvszombies.fandom.com/wiki/Flowers?oldid=2194576"
Community content is available under CC-BY-SA unless otherwise noted.