Not to be confused with Power Toss from Plants vs. Zombies 2.

Do 1 damage.
Bad Zombie! BAD Zombie!
Flick-a-Zombie was an unused undroppable common plant superpower trick card in Plants vs. Zombies Heroes and wasn't a member of any class. It cost 1

to play, and its ability did 1 damage to a selected zombie or the zombie hero. Its zombie counterpart was Flick-a-Plant.

Flick-a-Zombie, along with the other neutral superpowers, got scrapped in update 1.2.11, as superpowers became bounded to heroes.

It is based on a brown gardening glove.

Just like Whack-a-Zombie, or its zombie counterpart, Flick-a-Plant, its name may be a reference to an arcade game where a player must need a hitting medium to hit something couple of times in order to win.

Its description alludes to a saying when a pet (e.g. dog) does something that an owner does not want to do.

This trick can be played anytime. It can be played early on in the game to destroy early weaker zombies like Tennis Champ, Cuckoo Zombie, and Unlife of the Party. Saving this for late-game as a last-ditch resort could do if your opponent has 1 health left.

This trick is very weak, so it loses its power quickly in the mid-to-late-game. You shouldn't be affected too much, unless you are in a terrible situation. 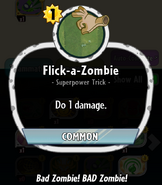 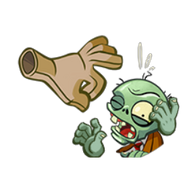 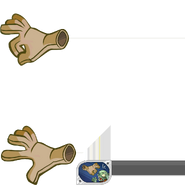