Flax Cannon is a plant that guards the Mega Flower in the Driftwood Shores map and Driftwood Shores Night. It appears as a couple of flowers that shoot fireballs at the zombies. There are three in the game. It requires a player interaction to fire. After the player interacts with it, he or she will control the Flax Cannon until the cannon is destroyed. Each direct hit deals 60 damage and fire damage afterwards. When a Flax Cannon is destroyed, each Zombie player will earn 250 coins.

Flax Cannon is based on the flax (Linum usitatissimum), a plant of the genus Linum in the family Linaceae; and an anti-aircraft cannon, a type of cannon used to combat air threats.

Aim for the zombies that fly high when you use the Flax Cannon.

Also, try to have someone guarding the platform with the Flax Cannons since they cannot attack zombies that have already landed and are attacking it from the ground.

When the Plant Team is using the Flax Cannons, it's best to fly low to the island, as the Flax cannot fire very low, but not too low because you will get instantly killed by crashing into the water.

As an Engineer you can use the Zombot Drone or Rocket Drone to destroy Flax Cannons or fly across to the island as the drone and destroy the Flax Cannons that way or damage the Mega Flower, but by the time the drone arrives it will only have half of its fuel left, so it is best to get there as the Engineer and land somewhere off to the side and control the drone from the island to get the most flying time so you can do more damage. 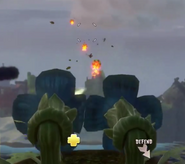 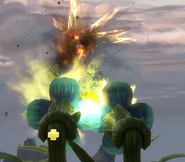