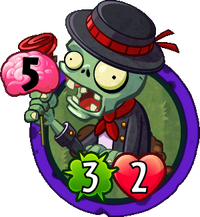 When played: Do 2 damage to the Plant Hero for each Dancing Zombie.
Also enjoys dancing the rumba, tango, and the Hokey Pokey.
Flamenco Zombie is a basic common zombie card in Plants vs. Zombies Heroes and a member of the

. He does not have any traits, and his ability does 2 damage to the plant hero for every dancing zombie on the field, including him, when he is played. His closest plant counterpart is Sonic Bloom.

He is based on Flamenco, an art form known to the Spanish regions. It includes dancing, singing, guitar playing, etc.

Also enjoys dancing the rumba, tango, and the Hokey Pokey.

While he has poor stats for his cost, his ability is a huge help for some instant damage to your opponent. While you could play him by himself due to his ability counting him too, there are many better options if you want to leave a 3

zombie and do 2 damage. Therefore, a dancing deck is optimal when using him.

Z-Mech goes with Flamenco Zombie very well, as he has access to Camel Crossing, a cheap and efficient way to enhance the survivability of dancing zombies (which tend to have low health) on the field, as well as Flag Zombie, who lets him swarm more dancing zombies earlier. Electric Boogaloo is no slouch either, as he too has various boosting tricks (although not as cost-efficient as Z-Mech's), including Secret Agent. Furthermore, he is the only hero who can do 10 damage with Flamenco Zombie's ability normally, due to him having access to Synchronized Swimmer, the only Amphibious dancing zombie so far, and Killer Whale, which allows him to play other dancing zombies on the aquatic lane. Impfinity can use In-Crypted, Firefighter, or Mixed-Up Gravedigger to reactivate Flamenco Zombie's ability, although Secret Agent is more efficient. And finally, Professor Brainstorm can make more brains via Cryo-Brain, or play Teleport to land a surprise attack on his opponent.

It is best avoided to play this zombie when your opponent is a few bars away from a block. This makes it a risky move, as Flamenco Zombie's ability may be blocked and wasted. Fortunately, the crazy class does have direct damage cards to waste super-blocks.

The zombie himself is pretty easy to destroy, but the real issue about this zombie is his ability. The best you can do is to count on luck and block it, but even that isn't possible if you have no Super-Blocks left. Therefore, it is better to either remove as many dancing zombies before Flamenco Zombie can be played, especially if your opponent starts rushing many of them out on the field (assuming your deck is suitable at removing them), or win before this can be played again. Binary Stars should be prioritized, as they can make Flamenco Zombie's ability deadlier.

If you go late into the game as a

Guardian hero, you can play Soul Patch to avoid taking damage yourself, although the Soul Patch in question will be heavily damaged or destroyed if the damage done is huge enough. Body-Gourd is also a better option, as he can fill up your Super-Block Meter to full so that you don't have to worry about getting heavily damaged by him.

Unless he is blocking your plants from finishing off your opponent, or you need to stall for time, do not Bounce this zombie unless you also take care of the other dancing zombies, as he can be replayed to do damage to you again. 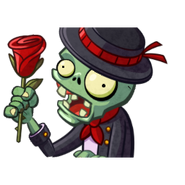 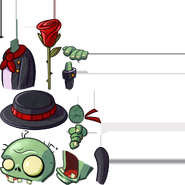 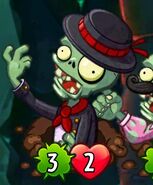 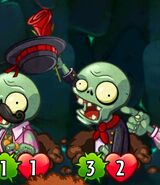 Flamenco Zombie with the 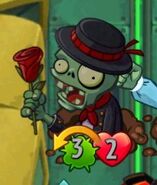 Flamenco Zombie with the

Overshoot trait, note that Flamenco Zombie is tinted gray due to a glitch 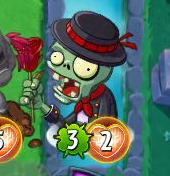 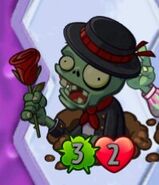 Flamenco Zombie tinted gray due to a glitch 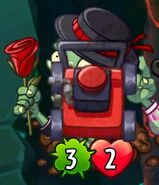 Lawnmower being played on Flamenco Zombie 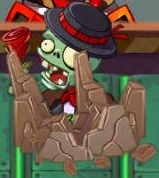 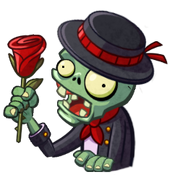 Transmogrify being played on Flamenco Zombie