For more information about this character, see Flag Zombie.

Flag Zombie dreams of eating a brain that's thinking of flags. On that day, and only on that day, will she put down her flag and take up the maracas she so desperately wants to play.
Flag Zombie is a Neighborhood Zombie in Plants vs. Zombies 3, She is one of the first few zombies encountered when playing.

She is based on the zombie with the same name and appearance of the original game and its sequel. Her ability to boost zombies on their lane comes from her appearances in the shooter games.

As with all previous games in the series, Flag Zombie is an easy zombie to deal with. However as the game goes on in Devour Tower, she gets stronger.

She can be difficult to deal with when other zombies come over to give it a boost and/or when this zombie gives other zombies a boost. There are not many strategies with the Flag Zombie, as almost any plant in the game can take her out. Just remember to keep taking care of Breakouts and getting seeds to your plants can get stronger so the Flag Zombie will not get too strong in later Devour Tower levels. 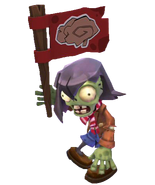