Seed Spit
The Flag Weed rallies nearby Plants, and provides them with a defensive morale boost.
Flag Weed is a Spawnable Weed in Plants vs. Zombies: Garden Warfare 2. ​It is essentially a Terracotta Weed that carries a green flag with an image of Crazy Dave on it. It searches for plants and follows them, giving the nearby plants a defensive boost.

It is the plant counterpart of the Flag Zombie, but gives nearby plants a defense boost instead of a speed boost. It cannot, however, apply the defense boost to itself.

The Flag Weed rallies nearby Plants, and provides them with a defensive morale boost.

The Weed's primary weapon is called Weed Whip, it is a short range attack that deals 15 damage at a slow pace, however, other variants of weeds will have slightly different melee attacks each with different names. Weeds will prefer to use their melee attacks, moving in closer to the target to attack them directly.

Seed Spit: A long ranged attack which deals 15 damage. Weeds will only use Seed Spit when their target is first sighted a long distance away, before moving closer towards the target to attack using their short ranged primary attack. Weeds use their ranged attack more frequently than their zombie equivalents.

A close up of a Flag Weed 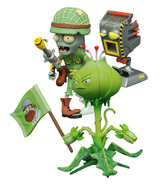 A Flag Weed figure (note: It lacks its Terracotta helmet) with a Foot Soldier and Rocket Bot figure