Not to be confused with the Fisherman Zombie in Plants vs. Zombies: Journey to the West.

Casts line to pull far plants to him.

(will not sink into the water, but can be tossed away)

(Immune to his effect)

Big Wave Beach - Day 22
Everyone is tired of Fisherman Zombie's fishing stories. He's always bragging about the size of his catch. Time and time again, he claims to have caught "the big one." But the fact of the matter is, no one has seen him actually catch a fish. Not once. It's more than a little suspicious.
Fisherman Zombie is the 12th zombie encountered in Big Wave Beach in Plants vs. Zombies 2. He pulls the nearest plant to the right one tile at a time (unless there is a surfboard, then he will pull it across the surfboard) until it either falls into the water or it reaches the Fisherman Zombie itself, after which he will throw his catch from the lawn, destroying it.

He cannot hook plants considered "low to the ground," such as the Iceberg Lettuce, but they may still be pulled forward from behind via another hooked plant.

Plus, he also wears a green-colored fishing vest buttoned up with a pocket on his lower left and right respectively. The Fisherman Zombie also sports in a black colored lifebuoy with white linings, allowing him to hold his position on the ocean for fishing. His fishing rod is colored orange.

Casts line to pull far plants to him.

Special: Pulls plants to the right
Special: Plants next to him are tossed off the lawn

Everyone is tired of Fisherman Zombie's fishing stories. He's always bragging about the size of his catch. Time and time again, he claims to have caught "the big one." But the fact of the matter is, no one has seen him actually catch a fish. Not once. It's more than a little suspicious.

Even though the Fisherman Zombie cannot eat your brains by himself, his special ability can easily allow other zombies, who are capable of eating your brains, through your lawn. Because he does not move and stays at the back column of the lawn, he is often safe from close-range plants like Snapdragon, Chomper, and Bonk Choy, while long-range plants will have trouble killing him before he can drag down multiple plants and ensure that zombies like Surfer Zombies and Deep Sea Gargantuars absorb all of the plants' projectiles.

Aside from instant-kill plants like Cherry Bomb and Tangle Kelp, the Magnifying Grass can kill him the quickest with two shots at 100 sun. Banana Launcher, Laser Bean, Strawburst and Missile Toe are good choices, especially when given Plant Food, as they can send an attack at any tile on the board, bypassing all other zombies.

Planting a column of Banana Launchers, Strawbursts, or Missile Toes in the back-most columns, then a row of defensive plants ahead of the row to be pulled forward by the Fisherman is a very effective strategy. That way, if octopi are on top of your defensive plants, you can bombard them with those attacks. Slowing plants like Winter Melon may also help against these zombies.

The Infi-nut's Plant Food shield is immensely effective as it will block hooks from all lanes. The hooks don't inflict damage to the shield, so this can be used to stall them until the next wave comes.

Instant use plants like Blover are also useful to prevent them from hooking plants. Simply put one in the same row as soon as the Fisherman Zombie tries to hook other plants. He will hook the instant use plant and provide it as a one time shield. You could also leave a A.K.E.E., Electric Peashooter, or Laser Bean in the back so they can target all zombies in their lane. A Spring Bean in the tile in front of the zombie, with a Lily Pad will also block the hooking, due to the fact that it will be at the floor and can't be hooked. Rotobagas, Ghost Peppers, and Caulipowers are also good distractions since they won't sink without Lily Pads due to them having the ability to fly over water.

Note: Coconut Cannon and Citron are useless against this zombie as they require a clear path to destroy him. Besides, they have a very slow recharge which is their main weakness as Fisherman Zombie acts quite fast. However, feeding Plant Food for them will be helpful to take out the Fisherman Zombie (be aware that in Citron's case, as its light-blue plasma ball may not hurt the Fisherman if there is a Deep Sea Gargantuar in front of it). Electric Blueberry is also a bad choice as they tend to get distracted by other zombies while the Fisherman Zombie can easily drag them around due to its slow recharge.

Fisherman Zombie is at his deadliest in this level. When he pulls an endangered Guacodile, the plant will rush away, causing you to lose the level. Using Infi-nut's force field can neutralize his hooks, while Primal Wall-nut can also help with its fast recharge. Be sure to back the hard shell plants up with some area-of-effect plants like Laser Bean or Fume-shroom or instant kills like Primal Potato Mine(Only can be planted in areas with no water) to prevent hordes of zombies from destroying your defenses.

Fisherman Zombie is one of the hardest zombies to tackle in this Endless Zone. That is due to the fact that he does not move and can instantly kill your plants by dragging them into the ocean. His position makes it hard for close-range plants (Bonk Choy, Chomper, Snapdragon) to attack him without being attacked themselves, while simultaneously protecting him from long-range plants by letting him hide behind faster and stronger zombies (Surfer Zombie, Octo Zombie, Deep Sea Gargantuar).

Radish is not immune to his hook, so avoid using him against this zombie. 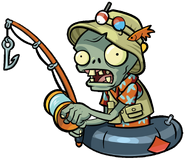 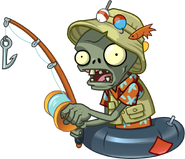 Fisherman Zombie about to pull a Twin Sunflower

An advertisement with Fisherman Zombie 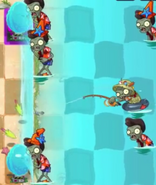 Infi-nut's shield can block the attack 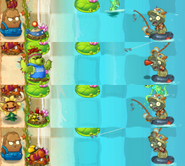 Various examples of underground plants being moved onto a Lily Pad by Fisherman Zombies. Normally they cannot be planted there.

Hypnotized Fisherman Zombie. This can happen in Penny's Pursuit with the Hypnotize Zombies perk. 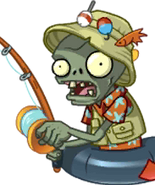 Almanac entry (note that he is on land)