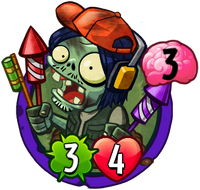 For the version in the Chinese version of Plants vs. Zombies 2, see Firework Zombie.

When played: Do 1 damage to all Plants and Zombies.
Want to clear some mushrooms? Fire works.
Fireworks Zombie is a premium super-rare zombie card in Plants vs. Zombies Heroes and a member of the

. He does not have any traits, and his ability does 1 damage to all plants and zombies on the field, including him, when he is played. His closest plant counterpart is Sour Grapes.

His description may be a reference to how many mushrooms in this game have 1 health, and thus, are able to be cleared with his ability. It also makes a pun on "fireworks," seperating the word to sound like a sentence.

Fireworks Zombie can clear weak plants off the field, and also has decent stats. As his description says, this is a good method of clearing out mushrooms since they tend to have low health, examples being Shroom for Two, Poison Mushroom, and Mushroom Ringleader. However, his ability also targets your other zombies on the field, slightly weakening them and reducing their chances of survival, or outright destroying them if they have low health. This drawback only has synergy with zombies that require themselves to be hurt in order for their ability to activate, such as Gas Giant, Newspaper Zombie and Jester. Also, when using this against a field of mushrooms, beware of Punish-Shroom, since it will heavily damage your defenses. Also, be very careful if there are any plants with "When hurt" abilities such as Mirror-Nut, unless there are many nuts on the field, or Hibernating Beary, or worst case scenario, if Briar Rose, along with many other flowers and Transfiguration are on the field.

Mixed-Up Gravedigger and In-Crypted can also benefit this by allowing him to replay his ability when he is revealed from his gravestone. You can also play him in Laser Base Alpha if the field is full of tough plants, as he will destroy all of them with the

Deadly trait. However, doing so will destroy all of your zombies as well, including himself, so consider using this as a clean-up before using this combo. Graveyard can also surprise your opponent as he will immediately destroy all 1

plants that were played this turn, which is especially useful against swarms of low-health plants. However, only Impfinity can normally use any of these.

This zombie is a nuisance thanks to his ability, being able to weaken or destroy a lot of plants at once with the right combo. But after his ability activates, he is only a zombie with average stats. Cards like Whack-a-Zombie and Berry Blast can instantly destroy him, and if you can't play tricks to remove him, you can simply resort to playing a plant on his lane in order to deal with him. Certain plants like Mirror-Nut, Hibernating Beary, Punish-Shroom, Briar Rose, Transfiguration and Pear Cub can also discourage your opponent from playing him.

Retrieved from "https://plantsvszombies.fandom.com/wiki/Fireworks_Zombie?oldid=2359227"
Community content is available under CC-BY-SA unless otherwise noted.