For the Plants vs. Zombies Heroes version, see Fireworks Zombie.

Firework Zombie tinkers with his family's firework design every day. Nobody but him knows how it works.

The firework would lose control without Firework Zombie's handling!

Biu~~~Bang! The fireworks are so beautiful.

Firework Zombie is the first unique zombie that encountered in Heian Age in the Chinese version of Plants vs. Zombies 2. After he walks few steps, he will launch fireworks at random tiles, which creates fire trails onto the targeted tiles. The fire trails will damage and stun plants on those tiles, and fade away after several seconds unless countered with Water Lotus.

Additionally, his firework stick can burn nearby plants similar to Explorer Zombie, Torch Kongfu Zombie, and Torch Monk Zombie, however, it can't be extinguished.

Firework Zombie wears an indigo hat that tied onto his neck (with a rope) and has black pairs of eyebrows, hair, mustache, and beard. Second, he wears a yellow-gray and indigo shirt and shorts, along with a white belt. Finally, he wears brown sandals and another white pants. He holds a firework stick upon his sleeves.

If he raise his firework stick, there will be firework sparkles after launching it and lands in four fire lits on land.

Firework Zombie is tough to deal with when there are multiple of them on the field. Water Lotus is the go-to opinion to extinguish fire trails that are being launched by their firework sticks. You can also use stallers like Stunion and Iceberg Lettuce to delay their advance on the lawn. Don't try to use ice plants like Cryo-shroom and Icy Currant to deal with them, as they can't extinguish their fireworks. 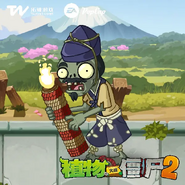 Another appearance in TIP
Add a photo to this gallery

Retrieved from "https://plantsvszombies.fandom.com/wiki/Firework_Zombie_(PvZ2C)?oldid=2370669"
Community content is available under CC-BY-SA unless otherwise noted.