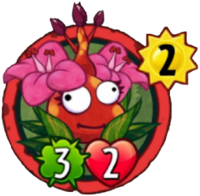 When played on the Ground: Make Hot Lava here.
Don't touch the floor. The floor is lava.
Fireweed is a colossal super-rare plant card in Plants vs. Zombies Heroes and a member of the

. It does not have any traits, and its ability makes Hot Lava on its lane when it is played on a ground lane.

It is based on the plant in real life with the same name (Chamaenerion angustifolium).

Its ability is a pun on the word "fire" in its name.

Its description is a reference to the floor is lava children's game, which was turned into an internet meme during 2016.

Don't touch the floor. The floor is lava.

Fireweed is not only a decent plant for its cost, but also a cheap way to remove a zombie environment on the field as the majority of plant environments can be expensive to play. Since this plant has 3 strength and Hot Lava does 1 damage before combat, you can do up to 4 damage to a zombie on the ground. This can be useful at destroying certain powerful zombies like Team Mascot, Zombot Drone Engineer, and even Stompadon.

However, the Hot Lava it makes is also Fireweed's downside; Fireweed itself will go down to any attack due to Hot Lava's damaging ability, and it also harms any plant played after it, limiting your choices on what you can play there. The fact that most Kabloom plants have low health does not help either. If you wish to avoid this, you can play this on the heights so its ability won't activate, and take advantage of its higher-than-average stats; even without Hot Lava, Fireweed's stats are sufficient enough to destroy most zombies playable by turns 2 and 3.

Spudow is one of the best heroes to use Fireweed as he can take advantage of Hot Lava's damaging ability with Guardian plants with "When hurt" abilities that he possesses. Cards like Pear Cub, Hibernating Beary, and Mirror-Nut can work well with this environment, activating their abilities before combat which can give his opponent a nasty surprise if they did not see it coming.

Because of its ability to make Hot Lava when played on the ground, it synergizes well with Cosmoss since it counts as an environment being played. However, Solar Flare can only perform this strategy.

You may also want to avoid playing it when Neutron Imp is on the field. Because it makes Hot Lava when played on the ground, he will do a bonus attack since it counts as an environment being played. Solar Flare can disable the bonus attack with Wing-Nut.

Since Fireweed is a root plant, Spudow can boost it with Starch-Lord. Since it is also a flower, Solar Flare can use it in her flower deck with Power Flower and Briar Rose.

Fireweed can easily override your environments and destroy any zombie that has 4 health or less, so be careful when playing them in the early game. But due to Hot Lava also affecting Fireweed itself, anything that can do damage is enough to destroy Fireweed.

Crazy heroes are best suited to dealing with Fireweed and taking advantage of it, as cards like Newspaper Zombie, Barrel of Deadbeards, and Gas Giant can be played in Hot Lava to activate their abilities.

Try to avoid Bouncing this, as Fireweed can be replayed to make another Hot Lava environment.

You can also punish your opponent for playing it by having Neutron Imp on the field. However, watch out for Wing-Nut, if you are facing Solar Flare, as it will nullify his bonus attack. 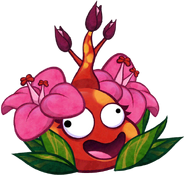 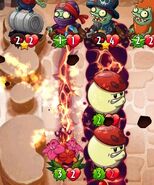 Embiggen being played on Fireweed

Slammin' Smackdown being played on Fireweed