Rare
Fire Rose is scorching hot. No really, she accidentally set fire to Crazy Dave's garage last week. But if you thought her Scorching Scepter was effective against recreational vehicles, wait until you see it take out a squadron of Zomboss' finest.
Fire Rose is the Rare fire variant of Rose in Plants vs. Zombies: Garden Warfare 2. Like any other fire-based character, the Fire Rose sacrifices some of her damage for the ability to ignite enemies upon a successful hit. Her primary weapon is the Scorching Scepter. It has 18 ammo and like the Frost Rose's projectiles, its shots can be charged to deal more damage, however a half-charged shot subtracts three rounds, and a fully-charged shot will subtract six rounds from its ammo count.

Fire Rose is scorching hot. No really, she accidentally set fire to Crazy Dave's garage last week. But if you thought her Scorching Scepter was effective against recreational vehicles, wait until you see it take out a squadron of Zomboss' finest.

Hold down fire to charge her Scorching Scepter. Each charge level deals more fire damage than the last!

Fire Rose's primary weapon is the Scorching Scepter. It is a chargeable, single shot weapon that deals 5-50 impact and critical damage depending on the charge rate but will also temporarily deal 4 fire damage per second.

Fire Rose's basic shots do less damage than the regular Rose, in exchange for setting targets on fire upon a successful hit. Similar to the Frost Rose, she can charge up her primary weapon. Stage 1 of charging allows Rose to fire 2 shots, each doing 15 damage as well as igniting the target. A fully charged shot will deal 50 damage as well as ignite the target. This means that Rose can charge a shot behind cover and then come out to finish of an injured foe or deal a heavy amount of damage.

Note that a fully charged shot can take away a great chunk of health from an Imp or its variants. Time Snare can be used to slow a foe and charge up a shot in the heat of battle, whilst, as usual, Arcane Enigma can be used to escape or damage a zombie. It can also be used after a target is ignited to rack up fire chip damage.

Fire Rose as she appears in the Stickerbook 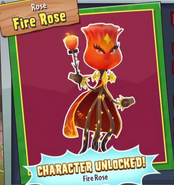 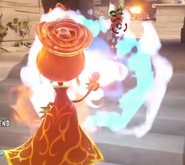 When the weapon is fully charged