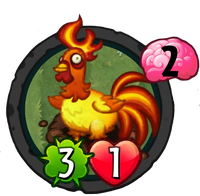 This moves to a random lane when a Plant is played here.
When this enters a lane: Do 1 damage to all Plants here.
According to the Chinese Zodiac, it's the year of the Fire Rooster. Crispy fried Plants for all your Zombies!
Fire Rooster is an event zombie card in Plants vs. Zombies Heroes and a member of the

. It does not have any traits, and its ability moves it onto another random lane every time a plant is played on the same lane as it and does 1 damage to all plants on the lane it moves to.

It was introduced in update 1.10.22 along with Blooming Heart and Defensive End. It became craftable as of update 1.12.6.

Its appearance is based on a rooster, a male gallinaceous bird, with cockerel being younger and rooster being an adult male chicken.

The description is a reference to the year 2017, which has the Chinese zodiac sign of Rooster.

According to the Chinese Zodiac, it's the year of the Fire Rooster. Crispy fried Plants for all your Zombies!

Fire Rooster can be a tough zombie to take out due to its ability, letting it essentially do 4 damage to a plant. Its ability allows it to take out a fragile plant hiding behind a Team-Up plant. If your opponent tries to manipulate Fire Rooster to attack a plant that is strong enough to destroy it, use moving tricks like Smoke Bomb to move it again, dealing more damage. To make it even more dangerous, playing Super Stench or Barrel of Barrels or having Zombot Sharktronic Sub on board allows it to destroy most plants when it moves to another lane with plants on them. However, it is quite weak in terms of health, so do not expect it to stay long unless you have boosting material.

It is a good idea to increase its strength, as if it moves into your opponent's lane, it can do a lot of damage, and if it moves into a lane with plants, it can do heavy damage to them. Maniacal Laugh is a great option to use on Fire Rooster, as it will be unpredictable where it will end up, and likely result in most plants being destroyed.

, but also the Hunt trait.

The best method for dealing with Fire Rooster is by using tricks that can take it out immediately. In addition, filling the field with plants so Fire Rooster can't escape is also an option, but expect a plant to be destroyed or damaged in the process. Look out for tricks as well, as the zombie hero can easily move Fire Rooster to become more dangerous. From turn 4 onwards, Sour Grapes will be an immediate counter. If you are playing as a

Kabloom hero, be careful of playing plants with 1 health, especially Shroom for Two, as Fire Rooster will destroy both Shroom for Two and Puff-Shroom if it moves to their lane. You can also force Fire Rooster to go to a ground lane, and then play Scorched Earth. Hot Date is also a useful counter, as it forces Fire Rooster to move to its lane, which causes both of them to be destroyed. Cards like Potato Mine and Prickly Pear also immediately destroy Fire Rooster if it ends up in their lane. 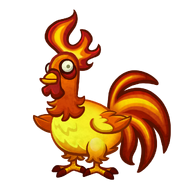 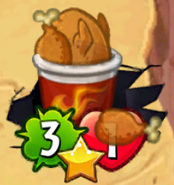 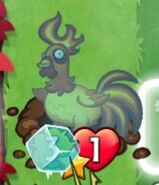 Fire Rooster about to do an

Fire Rooster with the

Fire Rooster with the

Fire Rooster with a star icon on its strength 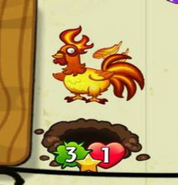 Fire Rooster floating due to a glitch 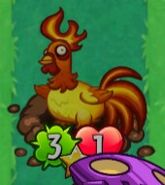 Fire Rooster tinted gray due to a glitch 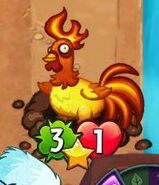 Gigantic Fire Rooster due to a glitch 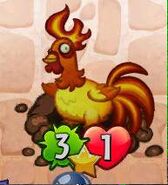 Gigantic Fire Rooster tinted gray due to two glitches at once 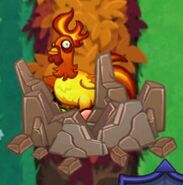 Shamrocket being played on Fire Rooster 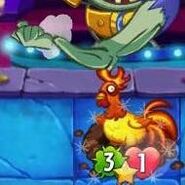 Barrel of Barrels being played on Fire Rooster

Fire Rooster on the advertisement for the Event Rewind Bundle