The primary weapon of the Fire Pea is called the Fire Pea Cannon. It deals 12 to 29 impact and critical damage based on distance and also deals the same amount of splash damage as the normal Peashooter which is 10. It will also deal 4 fire damage over time, but unlike the Toxic Pea, the only way to activate the fire effect is to damage the enemy.

The Fire Pea can be obtained from any sticker pack. 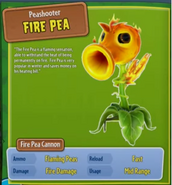 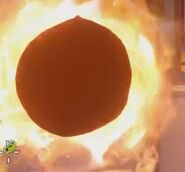 HD Fire Pea
Add a photo to this gallery

Retrieved from "https://plantsvszombies.fandom.com/wiki/Fire_Pea?oldid=2336101"
Community content is available under CC-BY-SA unless otherwise noted.