Rare
Rumor has it that a Sunflower once went on a date with a Fire Pea...

The name may be a reference to the Fire Flower from the Mario series.

Rumor has it that a Sunflower once went on a date with a Fire Pea...

Flame Pulse is the primary weapon of Fire Flower; all facts below apply to a fully upgraded weapon.

The Fire Flower's primary weapon is the Flame Pulse. It deals slightly less damage than the Sun Pulse (6 to 8 impact and 7 to 9 critical) but compensates for this by dealing 4 fire damage over time every time she damages the enemy with her Flame Pulse.

Damage is enhanced by the hotness!

The ability to ignite zombies and light them on fire has many uses, all may not be included below.

The Flame Pulse deals seven to ten damage at mid range, and an additional twenty burn damage over four seconds after each hit. This this gives the Fire Flower a very high damage profile for a Sunflower, making the Fire Flower an ideal class if you are frequently forced into combat. The Fire Flower's afterburn ability can quite easily turn the tables in a one-on-one fight as the impact and burn damage can stack up an absurd amount of damage, allowing for more easier vanquishes.

Most players do not think twice about engaging a Sunflower if they are healthy as Sunflowers are mostly considered as below-average in terms of strength and toughness. The Fire Flower, with proper skill can exploit this unwritten rule by using its above-average damage profile to score some extra vanquishes by taking enemies by surprise.

Taking potshots at enemies by popping in and out of cover and moving erratically can compensate for the Fire Flower's below-average health of 100 (GW)/ 110 (GW2), and gives the Fire Flower a bigger presence in combat as enemies will be forced to choose between attacking it (and receiving a ton of burn damage) or ignoring it (and letting it continue attacking and harassing your teammates). 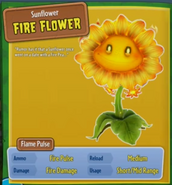 Fire Flower in the Stickerbook