He may be based on the Venus Fire Trap from the Super Mario games.

The Fire Chomper enjoys chasing the Zombies around, using his intimidating flames to make them flee."

Instead of the normal purple head the Chomper has, the Fire Chomper's head looks to have a lava texture. Its mouth appears to be on fire.

The Fire Chomper's basic attack is not a bite, but he breathes out fire to harm nearby zombies instead. The fire breath itself deals ten damage continuously, and causes damage over time to the zombies at a rate of five damage per second for a few seconds after the enemy is hit. He is still able to swallow a zombie whole from behind, however.

An additional benefit to the fire breath is it bypasses additional defenses on NPC zombies such as screen doors, coffins, barrels, and even outhouses making short work of heavily defended zombies, similar to the Fume-shroom.

Flame Spray is the primary weapon of the Fire Chomper. It deals ten damage continuously and five damage for every second for four seconds.

Although Fire Chomper has a spray that allows him to fight at slightly longer range, you should still play him as you would any other Chomper. The fire effect allows you to deal lots of damage when combined with the spray's initial damage. Combining this with Goop or Spikeweed works well to stack up the damage in a hurry. In Garden Warfare 2, his character upgrades can make him a major threat to zombies. When you can, put on the Health and Fire Upgrades to improve his health and fire damage respectively. 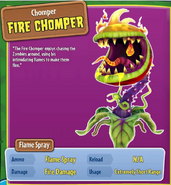