Rare
The Fire Cactus trades in her ability to blend into the environment for a devastating fiery weapon. She can also roast over 150 marshmallows simultaneously.

Rare
The Fire Cactus trades in her ability to blend into the environment for a devastating fiery weapon. She can also roast over 150 marshmallows simultaneously.
Fire Cactus is the Rare fire variant of the Cactus in Plants vs. Zombies: Garden Warfare and Plants vs. Zombies: Garden Warfare 2. She can be obtained from sticker packs bought in the Sticker Shop. Its primary weapon is the Fire Needle.

Along with the Fire Pea, Fire Flower, Fire Chomper, BBQ Corn, and Fire Rose, she is one of the six fire-based variants on the plants side.

The Fire Cactus trades in her ability to blend into the environment for a devastating fiery weapon. She can also roast over 150 marshmallows simultaneously.

Fire Needle is the primary weapon of the Fire Cactus; all facts below apply to a fully upgraded weapon. With the Legends of The Lawn DLC update, all DPS details are lower than the ones presented here.

The Fire Cactus' primary weapon is the Fire Needle. It deals lower damage than the standard Spike Shot at around 15 to 20 impact damage and 21 to 28 critical damage but compensates for this by temporarily dealing 4 (5 when upgraded) fire damage per second.

Ammo capacity increased with a plethora of flaming spikes.

The Fire Cactus has a shorter range than the other Cacti, but that does not prevent her from serving as a long-range sniper by shooting fire needles at incoming zombies. The Fire Cactus' fire effect and above-average fire rate makes her more suitable for select scenarios in mid-range combat than the rest of the Cactus family, but on the contrary, she performs worse at long range and close range than the Camo Cactus and the Bandit Cactus respectively.

Try sneaking up on a zombie to get the jump on him when you attack. Make sure you're not seen or else you will likely be vanquished. Be wary of the fact that this Cactus comes with the unlikely disadvantage of sticking out in nighttime maps, this trait easily ruins the Fire Cactus' main advantage, her medium range, making sniping even more challenging due to the fact that zombies can see this Cactus from very far away.

This extreme disadvantage however has a somewhat unusual and almost crazy solution, this being her customization. The player can try by customizing the Fire Cactus with hats, organics and tattoos that cover up as much of the red-orange-yellow color and glow (while being preferably less visible), which can make sniping somewhat easier. Giving her any customization that is green can also help with camouflaging. 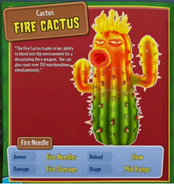