Purchased from Crazy Dave's Twiddydinkies
Sleeps during the day

Fire-shroom (火蘑菇; pinyin: huǒ mógū) was a plant in Plants vs. Zombies Social Edition. It was a premium plant that cost 75 sun. Its ability was to deal heavy fire damage to zombies eating it.

Judging by the color and shape of its cap, Fire-shroom seems to be based on the fly agaric (Amanita muscaria), a basidiomycete muscimol mushroom of the genus Amanita.

The way it damages zombies that eat it is likely based on the negative effects of eating the poisonous/psychoactive mushroom it is based on. 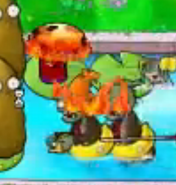 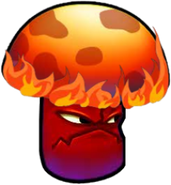 Fire-shroom
Add a photo to this gallery

Retrieved from "https://plantsvszombies.fandom.com/wiki/Fire-shroom?oldid=2285669"
Community content is available under CC-BY-SA unless otherwise noted.