Destroy a Zombie. Then do 4 damage.
The round-trip ticket is the same price as the one-way.
Final Mission is a galactic rare zombie trick card in Plants vs. Zombies Heroes and a member of the

to play, and its ability instantly destroys a selected zombie, then does 4 damage to a selected plant or the plant hero.

Its name and description are allusions to the fact that the rocket shown in this trick gets destroyed.

The round-trip ticket is the same price as the one-way.

Final Mission does a lot of damage for only 2 brains, and is certainly better than Cakesplosion, which costs 4 brains and is unable to hit your opponent. However, you must sacrifice a zombie in order to play this trick, making it more situational than ones like Bungee Plumber. This also means that you cannot play this trick if there are no zombies on the field.

If you want to use this card, sacrifice zombies that are either weak from the start, too weakened to continue fighting either due to excess damage or stat reductions, or less useful ones that take up space for the more important zombies later on in the game. Playing cards like Dance Off, Triple Threat and Disco Zombie are good ways to supply weak zombies.

But there's another use for this card. You can abuse "When destroyed" abilities of zombies such as Gas Giant, Portal Technician, and Barrel of Deadbeards, as well as Valkyrie's ability if she is in your hand, or Frankentuar's if it is on the field.

If you are Impfinity and have played Super Stench while Barrel of Deadbeards is on the field, or if it is in Laser Base Alpha, or you have used Barrel of Barrels on it, you can immediately play Final Mission on it to not only do 4 damage to your opponent but also wipe the field clean (unless there are armored fighters).

However, this will destroy all zombies, so a safer bet would be with the Zombot Sharktronic Sub. Gas Giant can be even more powerful if he is played in a separate turn, as you will be able to do up to 9 damage to the plant hero instantly.

This trick is also useful if your opponent's health is 4 or less, as you can play any zombie and then play Final Mission to finish the game. However, avoid this strategy if either your opponent's Super-Block Meter is close to full, they have played Uncrackable on the current turn, or if Soul Patch is on the field. In that case, you must find a way around it or wait till their invincibility goes down.

Professor Brainstorm can play this trick to activate Interdimensional Zombie's ability due to it being a science card, but that is pretty much it; Gadget Scientist and Zombot Drone Engineer cannot interact with it as it is a trick. However, if Cosmic Scientist Conjures this, Final Mission will do

Bullseye damage instead, so if your opponent has not played Uncrackable or Soul Patch, you can finish them off risk-free if their health is 4 or less. 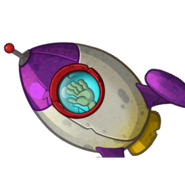 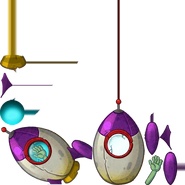