Not to be confused with Fertilizer, an item from Plants vs. Zombies.

.
Stinky, sure, but powerful stuff. Ask any Plant.
Fertilize is a basic common plant trick card in Plants vs. Zombies Heroes and a member of the

to play, and its ability gives a selected plant +3

. Its zombie counterpart is Vitamin Z.

It is based on fertilizer, any material of natural or synthetic origin that is applied to soil to supply plant nutrients essential for the growth of plants.

Its name is based on the real meaning of fertilize, which is to make something fertile.

Its description is an allusion to how fertilizer is usually made out of the manure of animals.

Stinky, sure, but powerful stuff. Ask any Plant.

Like Vitamin Z, Fertilize can be used in any part of the game to give a good boost to any plant to make it a good threat, or a decent attacker at the very least. While playing this on any decent plant is worth it, plants with powerful traits like Bananasaurus Rex (including Re-Peat Moss since their ability functions similarly like the

Double Strike trait), or plants that attack on multiple lanes like Threepeater are especially recommended.

However, it is risky to spend all your sun on playing this trick since it will be a waste if your opponent manages to remove the boosted plant. This is even more so if your opponent is either a

Sneaky hero (or both) and has left at least a few brains (at least 3), as they may be planning of playing something like a Rocket Science or Backyard Bounce. Distribute your boosts to put your opponent in a dilemma as to which plant they must handle.

Fertilize can be quite dangerous since it can turn a seemingly harmless plant into a threat, and a potential threat into a dangerous fighter that can change the whole game. Therefore, removing plants boosted with it should be the top priority. You can either use Locust Swarm, Rocket Science, or zombies with the

Deadly trait to do this (although the zombie risks being destroyed most of the time).

Bouncing the plant is also a good solution, because it would make your opponent waste the Fertilize boost and some sun too, though you will have to face it later anyway. 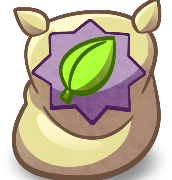 Fertilize being used on a plant (Guacodile in this case)