Far Future - Day 9 is the ninth level of Far Future in the Chinese version of Plants vs. Zombies 2. It is a Save Our Seeds level. Starfruit is showcased mid-way in this level which is only applicable for Normal Mode. When this level is finished for the first time, the player gets coins.

Survive and protect the endangered plants
In Normal mode, the player has to beat the zombies at Level 1.

The endangered Starfruits will be perfect for delaying zombies for sun production at first in order to protect them from a bunch of mechanical zombies later.

The endangered Starfruits can take out the early zombies, but the player should have good sun production for later on. E.M.Peach should be brought due to many mechanical zombies in this level. Later on in the level, Starfruit gets showcased for 0 sun, but only for three plantings. After planting more than that amount, the sun cost will revert to its original one, which is 150. However, this showcase is only applicable on Normal Mode, opposed to Hard Mode. 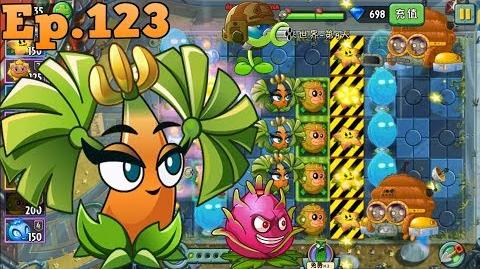 Survive and protect the endangered plants
In hard mode, the player has to defeat leveled-up zombies.

Even with E.M.Peach, the doubled health of the mechanical zombies will be pretty hard to deal with. It is best for the player to get the leveled-up Infi-nut from the star rewards and maybe another leveled-up attacking plant to finish this mode.

Level reward
Add a photo to this gallery

Retrieved from "https://plantsvszombies.fandom.com/wiki/Far_Future_-_Day_9_(Chinese_version)?oldid=2171417"
Community content is available under CC-BY-SA unless otherwise noted.