Four (Two ✕ and two □ from the conveyor belt)

This boss fight is similar to the boss fight of Far Future - Day 25, but there are a few differences that make it more challenging that the last battle. Dr. Zomboss will now summon zombies who were not in the last boss battle which are Robo-Cone Zombies and Disco-tron 3000s, and the new Far Future zombies which are Holo Head Zombies and Blastronaut Zombies. However, E.M.Peach is provided during this battle, which makes things much easier. Only use E.M Peach when there are several robots on the lawn at once, and only use Blover when there are many Blastronaut Zombies on the lawn or to stop the Zombot Tomorrow-Tron 2.0's charge attacks. After the first phase, Blover and E.M.Peach disappear from the conveyor, meaning you'll have to use them wisely. Also, note that Zombots here are immune to E.M.Peach, unlike the Chinese version.

Electric Blueberry comes in handy to dispatch Gargantuar Primes and other dangerous zombies in a hurry, so try to preserve them if you can. If that fails, or if there are many Holo Head Zombies on the lawn at once, use Plant Food on Citron. Because you do not have any lawn mowers in this battle, reacting fast is key. You need to eliminate threats as you see them, or else they will get too far into your defenses. If you are out of options, do not hesitate to use power ups to take out the zombies. Stall Gargantuar Primes and Mecha-Football Zombies whenever you can.

Your Power Tiles should be placed under Citrons or Bloomerangs, and Electric Blueberries. Use your plant food on Citrons when they have a clear shot at the boss, and on your Bloomerangs if you need the pierce to hit the boss. If you are suffering under heavy fire, use plant food on your Electric Blueberries, as they can instantly take out many zombies. Note that they don't target the boss.

The biggest threat in the beginning is the Blastronaut Zombie. You can lose in mere seconds (due to the absence of lawn mowers) if you do not get Blover quick enough, or if the Zombot Tomorrow-Tron 2.0 keeps pressuring the field with tough zombies. Do not be afraid to use Power Ups if necessary.

As long as you can keep the pressure on the Tomorrow-Tron 2.0, you will eventually win this battle.

One guaranteed way of winning is if you have the patience to wait until you have a Bloomerang, Citron, Electric Blueberry (if you bought it), and Infi-nut in the Zen Garden to quickly win this battle.

By Han0303
Add a photo to this gallery 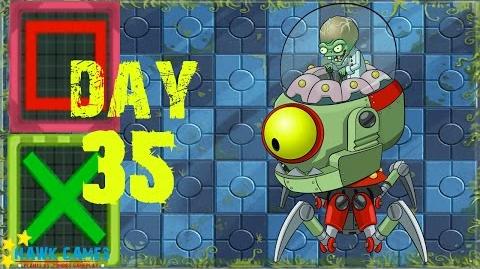 Retrieved from "https://plantsvszombies.fandom.com/wiki/Far_Future_-_Day_35?oldid=2159592"
Community content is available under CC-BY-SA unless otherwise noted.