The placement of mold colonies and Power Tiles make this level very unique. The zombies are also dangerous and can easily cause mayhem if powerful plants are not used. There are not many plantable spots to begin with either. Fortunately, there is an adaquate Plant Food supply. The player should use plant food whenever the zombies are about to go into the player's house. Plant Food on Snapdragon, Cold Snapdragon, Ghost Pepper, Laser Bean, Citron, and Homing Thistle are the handiest because as they are area-of-effect plants, the Plant Food effects can take up quite a lot of weaker zombies and damage the mechanical zombies. Usage of Power Tiles will be put to the test to win this level. 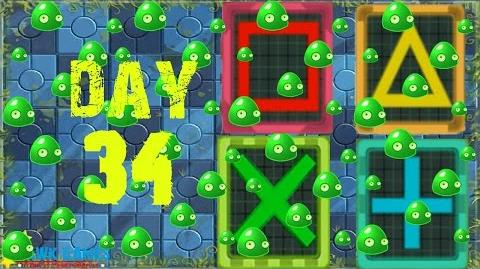 Retrieved from "https://plantsvszombies.fandom.com/wiki/Far_Future_-_Day_34?oldid=2323894"
Community content is available under CC-BY-SA unless otherwise noted.