This level has a unique ambush attack, in which the sap created from Sap-fling causes a Necromancy-like ambush. Defeating zombies quickly should be done so that the ambush zombies are less of a threat. Holo Head Zombie is among the ambush zombies. There are also Mecha-Football Zombies to mess up defenses, and Disco-tron 3000s to put pressure on the field.

This strategy requires some premium plants (but are all obtainable through gem purchases), plus an epic quest plant.

The goal of this strategy is to stall the zombies for as long as possible, so the zombies from "Sap Spawn!" won't emerge too close to the Sap-fling for you to handle.

Note: Upgrading plants is not needed. However, you have to complete the Rescue the Gold Bloom Epic Quest, along with a certain Pirate Seas, Frostbite Caves and Jurassic Marsh levels to use this strategy.

Note: Your Stallia should be upgraded to level 5 so that it gets its special ability.

By Comicboss4000
Add a photo to this gallery 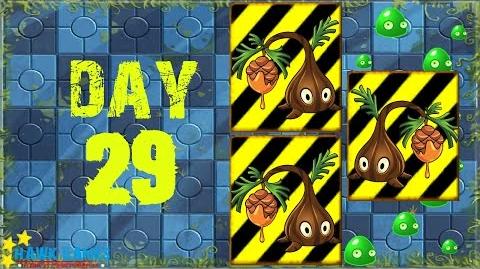 Retrieved from "https://plantsvszombies.fandom.com/wiki/Far_Future_-_Day_29?oldid=2323885"
Community content is available under CC-BY-SA unless otherwise noted.