Same as before
Prior to the 7.4 update, Far Future - Day 28 was the 28th day of Far Future. It is a Locked and Loaded level. Upon completing the level, the player receives a money bag.

The usage of Tile Turnip and Starfruit are essential for winning. This level is jam packed full of the new Holo Head Zombie, which has a lot of health. Luckily, there is a lot of Plant Food distributed in this level, meaning there is enough firepower to defeat them if the proper strategy is set up. Sunflower's low sun production makes it difficult to get enough sun production early on. In addition, there are four flags, Robo-Cone Zombies, Jetpack Zombies, and a few Gargantuar Primes. Red Stinger and Starfruit can be used in conjunction with Tile Turnips for effective zombie control. Infi-nut is also essential to hold the fort down. Starfruit spam will be essential as they can attack other lanes. If you have three columns, it will make the level somewhat easier. Red Stinger can be used for additional damage as well as slowing down the zombies with its Plant Food ability.

This strategy was created by User:Pvzarif
You need at least a Level 2 Red Stinger, Infi-Nut, and Tile Tulip

By AwkwardShota-kun237, with boosted plants
Add a photo to this gallery 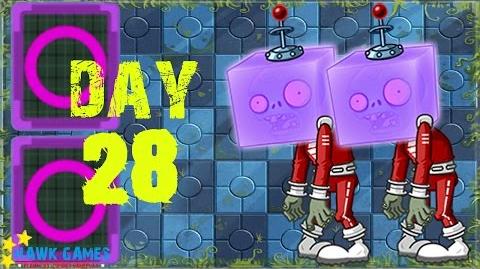 Retrieved from "https://plantsvszombies.fandom.com/wiki/Far_Future_-_Day_28?oldid=2341751"
Community content is available under CC-BY-SA unless otherwise noted.