A money bag
Prior to the 7.4 update, Far Future - Day 27 was the 27th day of Far Future. It is a Last Stand level. Upon completing the level, the player receives a Far Future pinata.

With the combination of the low sun given and dangerous zombies, this is a very difficult level to overcome. Using E.M.Peach and Blover during the level can help, but this also means less sun for setting up defenses. In addition, there are very unexpected Bot Swarm attacks on the first column every wave.

Fill the first column with Laser Beans and plant an Infi-nut in the middle of the second column. Fill the remaining four tiles with Snapdragons. Start the level and use the Plant Food given on Infi-nut and keep replenishing it whenever the shield becomes hazy. For Bot Swarms use a Blover as soon as the message appears. Two Mecha-Football Zombie arrive at a time. Use a Primal Potato Mine and a Squash or a Potato Mine. If the Mecha-Football Zombie reaches your Infi-nut the battle is over, so take care of it as early as possible and do not forget about Bot Swarms.

Plant Fire Peashooters in the first two columns. Use Blovers whenever too many Disco Jetpack Zombie spawn. Plant a Pepper-mint when a Bot Swarm happens. After you plant down the Pepper-mint, reload it with Plant Food

By AwkwardShota-kun237 (Note: Use the Blover when the huge wave starts)
Add a photo to this gallery 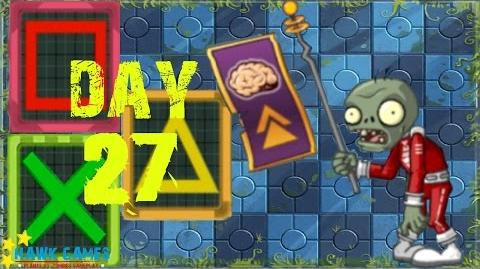 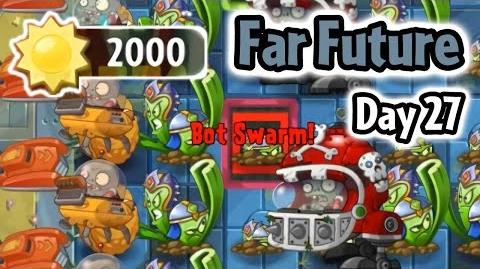 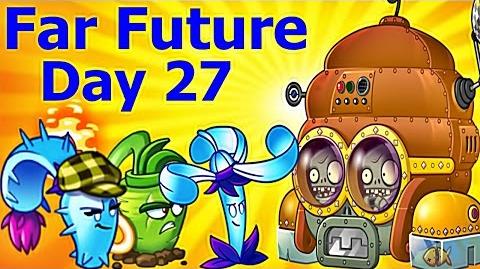 Retrieved from "https://plantsvszombies.fandom.com/wiki/Far_Future_-_Day_27?oldid=2363960"
Community content is available under CC-BY-SA unless otherwise noted.