Same as before
Prior to the 7.4 update, Far Future - Day 26 was the 26th day of Far Future. The player was introduced to the Robo Rally Zombie, the upgrade of Future Flag Zombie, which has greater health and speed, and will lead an even greater wave of zombies. Upon completing the level, the player receives a money bag.

(Crazy Dave and Penny appear)
Crazy Dave: The future's not what it used to be! There's more of it!
Penny: I believe zombies may be drawing strength from the time fissure, User Dave.
Penny: We will likely encounter more powerful versions of select zombies.
Penny: We may need to retreat to another timeline and return when our plants are stronger.
(Crazy Dave and Penny leave)

Many zombies appear in this level, and as Penny has stated, leveling up some plants will make this level easier. Gargantuar Primes are a big problem, as they are plentiful and spread out through the level. Also be alert of Bot Swarms and a new Jetpack Attack, which comes very quickly. Bringing Blover will aid greatly in this level.

Plant a column of moonflowers on column 2. Plant primal mine for the first robocone and stall the rest with primal wall nut on column 4 while planting column 1 with dusk lobbers. Prepare blover to blow the bot swarms on first wave. Shrink and em peach the first garg, wait till other machine zombies come then blow them all up. Use blover for 2nd wave too before bot swarm! Shrink the gargs and pf primal mine right before final wave. The rest is easy. 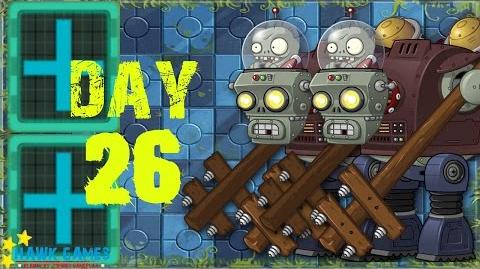 Retrieved from "https://plantsvszombies.fandom.com/wiki/Far_Future_-_Day_26?oldid=2334085"
Community content is available under CC-BY-SA unless otherwise noted.