Same as before
Far Future - Day 22 is the 22nd level of Far Future in the Chinese version of Plants vs. Zombies 2. After completing this level, the player receives a money bag. 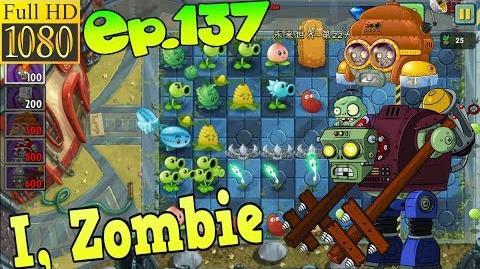 For the version of this level before the 1.8 update, see Zomboss Test Lab III.

Far Future - Day 22 is the 22nd level of Far Future in the Chinese version of Plants vs. Zombies 2. After completing this level, the player receives a money bag.

There are 2 lanes that are particularly dangerous, those being the middle lane and the bottom lane. The middle lane consists of 3 Spikerocks, a Kernel-pult, and a Winter Melon. This is a very deadly combination, as the Spikerocks will do damage as Winter Melon slows them down, and if Kernel-pult hits with butter, it will extend the time a zombie is on a Spikerock. In addition, there are some Threepeaters and Lightning Reeds next door to attack the zombie. It's best to save a strong zombie like a Mecha-Football Zombie or a Gargantuar Prime for this lane. The next lane is a lane full of Potato Mines, a Chili Bean, and a Heavenly Peach. Sending cheap zombies is recommended to use on this lane, as it will provide a cheap attack to either trigger a Potato Mine or eat a Chili Bean. However, the Threepeaters and Lightning Reeds in the lane above will need the player to use something like a Future Buckethead Zombie. The other lanes can also be quite troubling, but using the other zombies like Disco-tron 3000 will help deal with some of them.

I have complied a strategy that can beat this stage easily. Here it is:

Retrieved from "https://plantsvszombies.fandom.com/wiki/Far_Future_-_Day_22_(Chinese_version)?oldid=2281861"
Community content is available under CC-BY-SA unless otherwise noted.