Plan your defense and defeat the zombies
Far Future - Day 22 is the twenty-second level of Far Future in Plants vs. Zombies 2. It is a Last Stand level. The player has 2250 sun to start with. When this level is finished for the first time, the player gets a Far Future pinata.

This level intends the player to master the use of Power Tiles. This is because there are zombies that are bundled together in some lanes with Power Tiles. These zombies that are grouped together prove a huge threat, especially the Robo-Cone Zombies and the Mecha-Football Zombies. There is also a Gargantuar Prime, which can be troubling for the player to deal with. The player can only spend 2250 sun, which is not a lot for the zombies to be defeated so the player must choose wisely on which plants should be used.

This strategy can complete the level without Plant Food, paid content, premium plants, or losing any lawn mowers. There is a variant as well if you have already unlocked the Magnet-shroom.

Keep an eye on the Wall-nuts and if one is almost dead, dig it up and replant it (often occurs with the one attacked by the crowd of Bucketheads). When the first three Robo-Cones appear, bomb all three with a Cherry Bomb; they will die quickly when they reach the Snapdragons. When the three Mecha-Footballs appear, dig up the center lane Spikeweed for more sun and Cherry Bomb them as well; the Snapdragons will finish them without letting them push the plants. When the Robo-Cone/Gargantuar Prime team appears, dig up more Spikeweeds for sun and then Cherry Bomb them while they are still together. The Robo-Cone will die on the frontlines, and when the Gargantuar approaches, dig up the Wall-nut ahead of it to let it enter the Snapdragon inferno, then disable it with an E.M. Peach where it will be killed before it can recover. Mop up the survivors, if need be dig up Snapdragons and dying Wall-nuts to get more Cherry Bombs and Wall-nuts, as well as emergency Potato Mines and Chili Beans if needed.

If the strategy is too difficult to use, simply use Plant Food on the Snapdragons for an easy victory.

If the Magnet-shroom is unlocked, you may substitute another plant for it and plant two of them in the first column, reserving Spikeweeds only for damaging incoming enemy vehicles.

Random plants to bring with you too (Not a must) :

Arma-mint (Any level is fine)

Hypno-shroom (Any level is fine)

Primal Potato Mine (Any level is fine)

Plant 2 Stickybomb Rice at the row closest to your house. Plant Turkey-pult on three rows, at last, plant one Infi-nut at the front yellow power tile. You should have 325 sun left. Save them up for Hurrikale. While Stickybomb Rice is stalling the zombies, Turkey-pult's turkies can overrun the zombies easily. Hurrikale can be used when the zombies are really close to your house. Arma mint is used to power up the plants: stickybomb rice and Turkey-pult. Hypno-shroom can turn a tough zombie into your friend. Primal Potato Mine can quickly kill a crowd of zombies.

A fail strategy by AngryBirds'sSuperFan 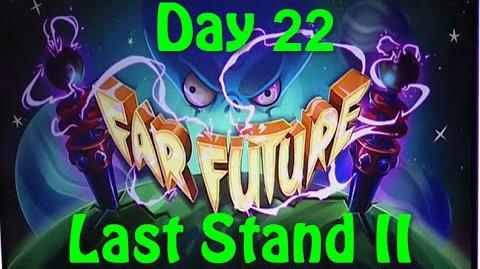 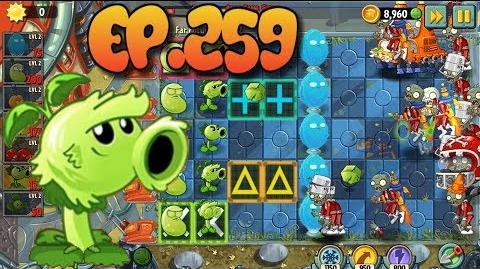 Retrieved from "https://plantsvszombies.fandom.com/wiki/Far_Future_-_Day_22?oldid=2363181"
Community content is available under CC-BY-SA unless otherwise noted.