Survive and protect the endangered plants
Far Future - Day 20 is the twentieth level of Far Future in Plants vs. Zombies 2. It is a Save Our Seeds level. To complete this level, the player must protect five Starfruits which are premium plants. When this level is finished for the first time, the player unlocks an upgrade called Mower Launch.

The player should use the endangered plants to their advantage, as they can take out the first few zombies, so plants like Potato Mine are not suitable for usage.

The dangerous zombies here are the special zombies of this world. Shield Zombie will protect the zombies from Starfruit's shots, Robo-Cone Zombie has a lot of health, which can easily pass through defenses, Bug Bot Imps come in ambushes. However, all of these zombies have minimal appearances in this level, namely the Robo-Cone Zombie Additionally, this level is highly concentrated with Future Zombies. The player might want to bring E.M.Peach, as well as any defensive plant, to protect the Starfruits.

However, there is one zombie that can help the player being the Mecha-Football Zombie as it can push the endangered Starfruits to safer area to prevent zombies from reaching it. Keep in mind that there's only one Mecha-Football Zombie so do not rely on this too much. In addition, if you are going to use this strategy, make sure you have the tools to defeat it before it can fully push the endangered Starfruit to its demise.

This strategy can complete the level without premium content, Plant Food, gemium plants, or losing any lawn mowers.

Plant two columns of Sunflowers in the back columns. Protect the Starfruit with Tall-nuts and Wall-nuts, starting with the middle lanes first. If a Buckethead or Conehead Zombie is somehow getting close at the beginning and defensive plants have not recharged, use a Cherry Bomb or stall it with a Sunflower.

Fill up the column behind the Starfruit with Snapdragons. When the first Bot Swarm arrives, let them all hatch and then freeze them with an E.M.Peach. The Starfruit will finish them with minimal losses to the Sunflowers, if any. Meanwhile, plant Spikerocks in front of the Sunflowers as you build sun to nullify the Bug Bots completely, then more ahead of the Tall-nuts/Wall-nuts. Be sure to heal defensive plants and use Cherry Bombs and E.M.Peaches to control the vehicle enemies, especially the final Mecha-Football Zombie.

If you use Plant Food, Snapdragon's Plant Food attack and buffs to the defensive plants will finish this level easily.

Plant Sun-shrooms on the first column. When the zombie enters, get Rotobaga in action by placing it beside the Starfruit that's the power tile (do the same for the remaining two). Whenever the Bug Bot Imp appears, use Plant Food on the Power Tile Rotobaga. Whenever Robo-Cone and Mecha-Football Zombie appear, use E.M.Peach to stun them and start planting Primal Peashooter on the second row beside Sun-shroom. (WARNING: If Primal Peashooter's recoils back the Bug Bot Imps, it will have the tendency of eating up your Rotobagas). When the final wave comes, place Chard Guard in front of the Starfruit (same for the other four as well) and use E.M.Peach to stun any machines.

Your lawn should look like this after completing the aforementioned steps:

Finished by The Maverick Hunter 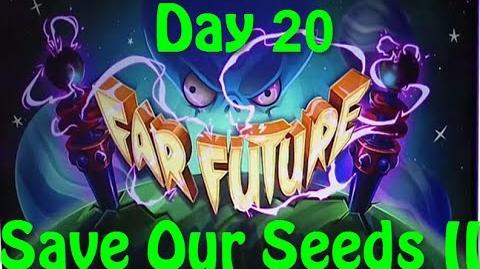 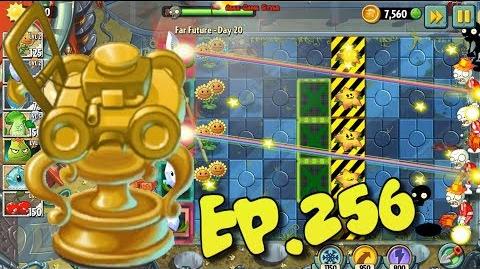 Retrieved from "https://plantsvszombies.fandom.com/wiki/Far_Future_-_Day_20?oldid=2266156"
Community content is available under CC-BY-SA unless otherwise noted.