你会说中文吗？
This article is about content available solely in the People's Republic of China.
Template:ProfilePic2

Far Future (未来世界; pinyin: Wèilái shìjiè; translation: Future World) is the fifth world in Chinese version of Plants vs. Zombies 2. It was released on July 11, 2014.

Far Future takes place in the 24th century where the zombies have already mastered science and have successfully mass-produced advanced technology and weaponry to combat the plants of all the worlds, such as laser technology, mechanized walkers, etc. There are seven new plants and twelve new zombies that are introduced in this world. The player can unlock this area by beating Wild West or Kung-Fu World first.

It is the first world where level 3 zombies show up but in the first levels zombies are still in level 1. By this time players must already have some level 2 and 3 plants or this world can be relatively difficult.

The stage element of this world are the Power Tiles, special tiles that shares the same Plant Food across all the plants planted in matching Power Tiles. This gives a distinct advantage to the player, as Power Tiles do not hinder the player.

In the year 2323, the zombies will have brain extraction down to a science! Can the plants of the future save you from the undead of tomorrow?

If my systems f-f-f-freeze up, we could be stuck here forever!
This has content that has been changed on the latest updates, making the information no longer correct. Please update it, or the zombies will eat your brains!

Sun Bombs is Far Future's exclusive Brain Buster. In this Brain Buster, the player is prohibited from using sun-producing plants excluding Sun Bean and must rely on the sun that is falling from the sky. Players can use the sun to their advantage as an offensive weapon by collecting it before it lands, making it explode. However, it can also be their own disadvantage as the explosions harm plants too.

Besides Ancient Egypt, Far Future has also a Special Delivery, which is played at the sixteenth day, a Brain Buster without any criterion to accomplish in order to achieve victory. Much like Day 8 battles, the plants provided to the player are given via conveyor-belt and the player must survive a set of waves.

The player must survive a flag in order to accomplish the level. In this Brain Buster, the player is given an extreme amount of sun to make use of and two or four Plant Foods at their disposal because there will be no glowing zombies and falling suns to replenish sun for plant production to aid the player from a victory. All the sun-producing plants are not allowed in this Brain Buster, but other than these five, there are other plants as well that are not allowed. Followed by that, the player will deal then with an extreme number of zombies charging at their lawn. If the player is very creative enough to formulate his own plan, he can win without the aid of Plant Food.

This Brain Buster is similar to I, Zombie, although it is China exclusive. Instead of planting plants, the player uses zombies to defeat plants. Every plant eaten is worth 150 sun, Unlike I, Zombie, there are no Sunflowers. The player's goal is, instead of eating the brains, to destroy all of the plants.

Main article: All by Oneself

Far Future on the World Map 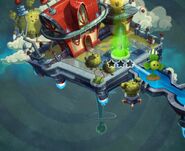 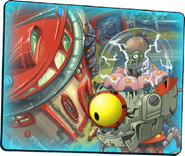 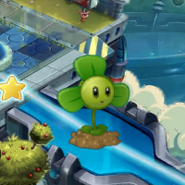 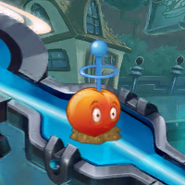 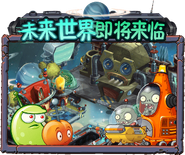 For all the non-chinese trivia about Far Future, see Far Future.

Areas
Retrieved from "https://plantsvszombies.fandom.com/wiki/Far_Future_(Chinese_version)?oldid=1432796"
Community content is available under CC-BY-SA unless otherwise noted.