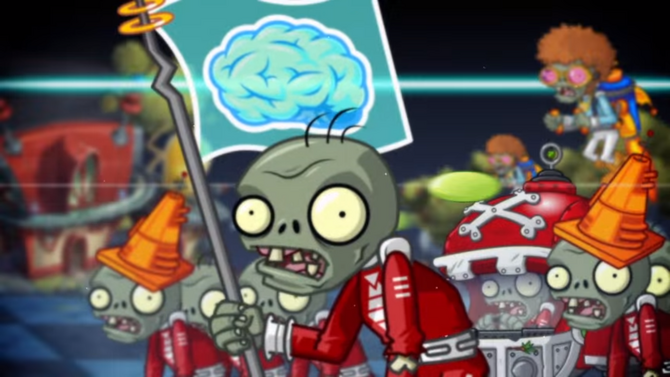 Complete Lost City
Far Future is the 6th world (4th world released chronologically) in Plants vs. Zombies 2. It was released on March 27, 2014, but the extension levels were released on March 15, 2017 (These have since been moved to the Travel Log as Epic Quests as of the 7.4 update). Multiple images of the Far Future were also released by Electronic Arts two days before the official release of this world.

Far Future takes place in the 24th century (the year 2323) where the zombies have already mastered the science of brain extraction and have successfully mass-produced advanced technology and weaponry to combat the plants of all worlds, such as laser technology, mechanized walkers, etc. There are seven new plants and twelve new zombies that are introduced in this world. The player can unlock this area by using this world's Key, which is only obtainable after completing Lost City - Day 32.

In the year 2323, the zombies will have brain extraction down to a science! Can the plants of the future save you from the undead of tomorrow?

The player uses the key obtained in Lost City - Day 32, giving them access to the future.

When the player defeats Day 7's wave, a cracked monitor showing "ERROR 404, BRAINS NOT FOUND" is shown, indicating their technology may be powered by brains. On Day 8, Dr. Zomboss writes a note before the huge wave attacks. The wave with the Gargantuar Primes is defeated.

On Day 25, Dr. Zomboss writes a note saying that Crazy Dave, his sleeper agent, will turn against the player upon saying the secret word "Hypno-zombnosis." After the Zombot Tomorrow-tron is destroyed, the hypnosis stops, Dr. Zomboss then retreats.

Far Future is a easy to a medium world. Turning into a Hard World in the Epic Quest. It contains 12 hard days. Like Wild West, there are many easy levels, particularly in the first 25 levels of this world. However, the next 10 levels are really difficult. It is quite a lot easier than the previous world, Lost City for the first 25 levels, what suggest an unespected change in the world orders, but it is a lot harder for the next 10 levels.

Although Power Tiles are not able to be used in normal levels, they can be given in conveyor-belt levels.

Play extra hard Far Future levels 26-35 to not quite a googleplex of gems!

Since the 7.4.1 update, this limited-time Epic Quest of 10 steps was added. It uses Far Future days 26 to 35 as the equivalent of its 10 steps. A money bag is awarded after completing each step, and completing all 10 levels will give the player 100 gems.

Sun Bombs is Far Future's exclusive Brain Buster. In this Brain Buster, the player is prohibited from using sun-producing plants. The player is forced to rely on the sun that is falling from the sky. Players can use the sun to their advantage as an offensive weapon by tapping it before it lands, making it explode. However, it can also be their own disadvantage as the explosions harm plants too.

Besides in just Ancient Egypt, Far Future has also a Special Delivery, which is played at the sixteenth day, a Brain Buster without any criterion to accomplish in order to achieve victory. Much like Gargantuar battles, the plants provided to the player are given via conveyor-belt and the player must survive a set of waves.

Locked and Loaded restricts the player to using only pre-chosen plants. They are only required to use the plants given to them in order to win the battle. Even though the plant may be locked, they get an opportunity to use that plant (unless it's unlocked already). This will serve as a demo for that plant if ever that manages to happen. The player must win only using the given plants to them. Locked and Loaded serves as a reference for a certain weapon in real life, where once it is armed, it should not be disarmed anymore.

The player must survive a flag in order to accomplish the level. In this Brain Buster, the player is given an extreme amount of sun to make use of any two or four Plant Foods at their disposal because there will be no glowing zombies and falling suns to replenish sun for plant production to aid the player from a victory. All the sun-producing plants are not allowed in this Brain Buster, but other than these five, there are other plants as well that are not allowed. Followed by that, the player will deal then with an extreme number of zombies charging at their lawn. If the player is creative enough in formulating his/her own plan, he/she can win without the aid of Plant Food.

In this Brain Buster, the player is forced to survive the wave of zombies and protect the endangered Citrons, Starfruits and Sap-flings. The player will fail the level if the endangered plant(s) dies.

Terror from Tomorrow is Far Future's Endless Zone. The player can either go directly to take intensive and dangerous levels after beating the world's fourth day or wait until all other Far Future levels have been beaten. Like Wild West and Pirate Seas, never before encountered zombies will be encountered early if the player takes this level as soon as possible instead. As the player progresses, machines start becoming more common and appear earlier. It is even entirely possible for a Robo-Cone Zombie or a Disco-tron 3000 to appear as the second zombie in a level later on. The player must devise smart strategies to get far, as Gargantuar Primes and other machines will make it difficult to get far. A lot of players find this the easiest endless zone because of the power tiles.

The Zombot Tomorrow-tron is Far Future's boss. It can summon any Far Future zombies except for the Flag Future Zombie and Disco Jetpack Zombie. It also has a charge attack where it kills all plants and zombies in two rows unless stopped with Plant Food or Blover. Finally, it has a missile attack that targets all plants in a certain Power Tile (indicated by the Zombot Tomorrow-tron's eye and the targets above the plants). Like in certain other Far Future levels, Power Tiles are also given via the conveyor-belt, but only six Power Tiles to be given.