Turns invincible every few seconds
Fantastico is an Elusive Zombie Foe in Plants vs. Zombies: Battle for Neighborville. He resembles an 80s Action Hero with the "Unicorn Hero" Costume. His special ability allows him to become completely invulnerable to any plant attack for a short period of time every few second. He can be fought in the Town Center and defeating him unlocks the Elusive Foe: Fantastico medal.

Fantastico will occasionally become invincible, in which he can still fire and use abilities. As such, it is ideal to keep your distance and retreat upon him becoming invincible.

Keep in mind that elite zombies cannot be swallowed by Chomper’s Burrow ability, so playing Chomper may not be ideal.

Due to the way he turns invincible every few seconds, a great character to use to defeat him is the Citron. Fire at him when he becomes vulnerable and block his attacks with the Peel Shield when he's invincible. This allows you to prevent yourself from getting constantly vanquished. 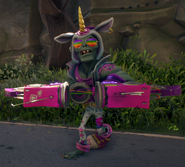 Fantastico's location on the map