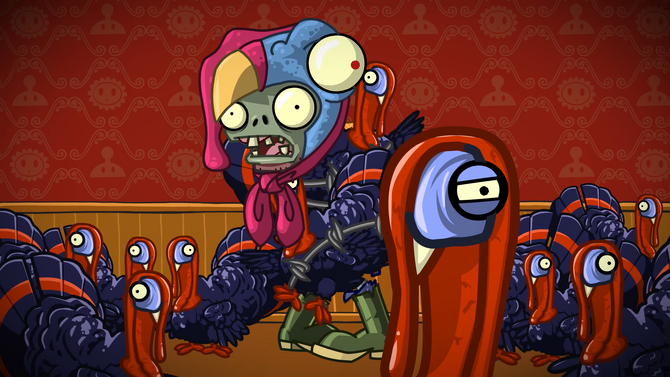 Fall Food Fight (often shortened to just Food Fight) is a recurring special event in the Plants vs. Zombies franchise. It is an event celebrating U.S. Thanksgiving and usually runs from late November through early December.

Food Fight was first celebrated in Plants vs. Zombies 2 on November 26, 2014 with the release of exclusive Piñata Parties and the inclusion of the special edition plant Sweet Potato. Following years saw the return of exclusive Piñata Parties and the release of other special edition plants such as Parsnip in 2016, and Sling Pea in 2018.

The Player's House during the Food Fight Piñata Parties

A screenshot of a 2014 Piñata Party

Promotional Art
Add a photo to this gallery

Fall Food Fight was first celebrated in Plants vs. Zombies: Garden Warfare on November 25, 2014 and saw the release of a new exclusive sticker pack, the Turkey Attack Pack, which contained a new Thanksgiving themed Spawnable Zombie named the Turkey Browncoat.

The Turkey Browncoat in-game
Add a photo to this gallery

Food Fight was first celebrated in Plants vs. Zombies: Battle for Neighborville on November 1, 2019. It includes a Food Fight prize map, with the Kitty Cap costume for the Night Cap as the completion reward. It also includes character challenges for Sunflower, Night Cap, Captain Deadbeard, and Super Brainz, as well as a pie scavenger hunt event, where players can collect 24+ pies scattered around Giddy Park and the free roam areas in exchange for an Acorn hat similar to the one worn by Sir Crustworthy, the quest-giver of this event.

Dave Manor and Giddy Park during the event 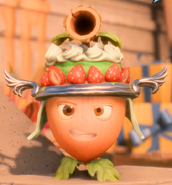 Sir Crustworthy, the quest giver for the event.
Add a photo to this gallery

The Mayflower Pack, an exclusive pack tied to the event

An advertisement for the Food Fight Bundle Pack, featuring Transfiguration
Add a photo to this gallery

Retrieved from "https://plantsvszombies.fandom.com/wiki/Fall_Food_Fight?oldid=2268583"
Community content is available under CC-BY-SA unless otherwise noted.