Plants vs. Zombies Wiki
Register
Don't have an account?
Sign In
Advertisement
in: China exclusive, Under construction, Locations,
and 2 more 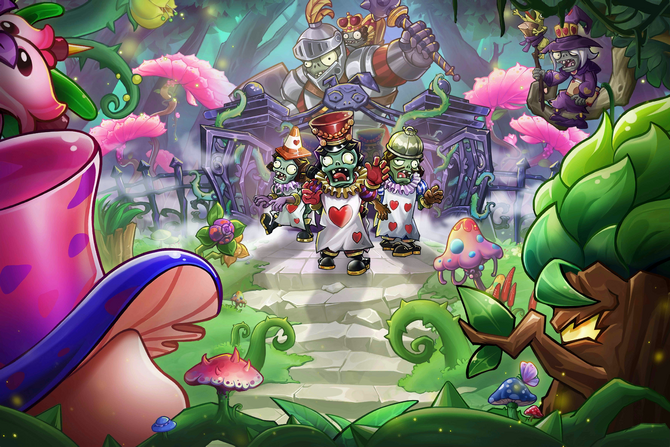 Beat level 2 of the second world
Fairytale Forest (童话森林; pinyin: Tóng​huà Sēn​lín), also referred to as Fairytale World (童话世界; pinyin: Tóng​huà Shì​jiè), is a world released for the Chinese version of Plants vs. Zombies 2. It is the 1st world released for the new Secret Realms game mode and the 17th world overall. Part One was released in the 2.8.4 update on April 25, 2022 on Android and iOS devices.

The primary mechanic of this world is Magic Fog. Magic Fog is similar to the Fog found in Dark Ages. Unlike Dark Ages fog however, Magic Fog cannot be cleared by Plantern, Lantern Cherry, Torchwood or Blover. New plants cannot be placed on tiles covered by Magic Fog, but preexisting plants will not be affected by Magic Fog.

The world based off of various fairytale and fantasy aesthetics, pulling especially from Lewis Carroll's Alice's Adventures in Wonderland.

*First time rewards other than coins, diamond, and gems.