It's hard for Fairy Ring to find alone time. If she so much as sneezes, the resulting spore cloud spawns a Puff-Shroom who asks endless questions. Questions like "Where am I? What's my name? Are you my mom? Where do Puff-Shrooms come from?"

Does heavy damage in a 5x5 area, turning any defeated zombies unto Puff-Shrooms.

Fairy Ring Mushroom was a Legendary Scrapper plant introduced in the pre-2021 version of Plants vs. Zombies 3. She created Puff-Shrooms from defeated zombies.

Fairy Ring Mushroom was the first Legendary plant obtained by the player after beating Floor 21 of Devour Tower along with Night Cap. Her seed packets were more likely to be dropped in Shallot Graveyard breakout levels.

She attacked zombies in a 3x3 area in a similar manner to Phat Beet or Gloom-Shroom.

When any zombie was defeated by her attack, the zombie was transformed into a Puff-Shroom, similar to Witch Hazel. This mechanic was also similar to Spore-shroom as well.

The player could only have one Fairy Ring Mushroom on the lawn at a given time, similar to other Legendary plants.

Fairy Ring Mushroom was based on, and got her name from "fairy rings", which are a ring of smaller mushrooms that, in numerous European folklore, are often seen as hazardous and dangerous areas.

Specifically, Fairy Ring Mushroom was based on the mushrooms that form the ring such as the mushroom of the same name (Marasmius oreades), also known as the Scotch bonnet or fairy ring champignon.

The "Fairy" part of her name alluded to how she presumably transformed zombies using magic, while the "Ring" may allude to how she attacked in a 3x3 "ring" around herself.

Fairy Ring Mushroom's Plant Food ability was called Mass-Shroom, which dealt heavy damage to all zombies in a 5x5 area around herself.

Fairy Ring Mushroom's Tacobility was named Mushroom Minions, which automatically promoted any Puff-Shrooms spawned from her attack with a Taco. 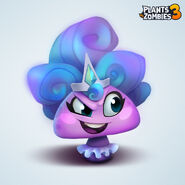