Fusion: Destroy a Zombie here.
Really good at staring contests.
Eyespore is a triassic rare plant card in Plants vs. Zombies Heroes and a member of the

They do not have any traits, and their Fusion ability instantly destroys the zombie on their lane that is not in a gravestone, if there are any.

They are based on moss, small, flowerless plants that typically grow in dense green clumps or mats, often in damp or shady locations. However, Eyespore's appearance (fuzzy purple mass, horns, multiple eyes) is more closely based on stereotypical monsters.

Eyespore is a weak plant in terms of stats and is more reliant on its Fusion ability. In the early game, Eyespore can destroy troublesome zombies like Jurassic Fossilhead and Cat Lady, and in the late game, they can destroy monstrous threats that are too much for your plants to handle.

However, if you want to destroy a zombie already on the field, you will have to play Eyespore in front of that zombie, which means that they have to survive the Zombie Tricks phase and the Fight! phase this turn, and the Zombies Play phase next turn, which is very unlikely due to Eyespore's low health, even if they are Conjured by Genetic Amplification.

Therefore, it is better to quickly utilize Eyespore's fusion ability on the same turn it is played. As Eyespore does not affect the plant fused with it, a cheap plant can be expended to easily destroy a zombie. This usually only occurs from the third turn onwards, or on the second if a 0-sun plant is played on it.

But there is another use for Eyespore: putting pressure on your opponent. If you play Eyespore on an empty lane, your opponent will refrain from playing strong zombies or boosting tricks there, as Eyespore's Fusion ability puts any of them to waste. You can take advantage and play some Team-Up plants yourself, or boost Eyespore.

However, Team-Up plants either lack strength or health, making them unsuitable for your main offense in most situations. Your opponent can also play tricks or zombies with damaging, destroying, or stat-degrading abilities to snipe Eyespore from another lane, as it only has 1 health, and Eyespore is not worth boosting due to its low base stats as well as the nature of Fusion fighters.

While Chompzilla can give it

Eyespore's Fusion ability is very dangerous, as it can destroy any zombie regardless of strength, and also bypasses the

While Eyespore can be played on as early as turn 2, they will have to be confronted by a zombie, which is basically suicide for Eyespore. This means that you only have to worry about them later on in the game, but once that happens, you won't be able to stop its ability from activating, so prepare for the worst.

You could choose to leave Eyespore's lane empty so their Fusion ability can't destroy any zombies, but your opponent can take advantage of this play something with Team-Up on their lane, and they will keep hurting you until you play something to deal with the plant or Eyespore. In that case, zombies whose ability hurts or destroys plants outside their lanes, or tricks can deal with Eyespore.

But Eyespore's best counter is Gravestone zombies and relevant cards, as they are immune to Eyespore's instant-kill ability. Unless you are facing Wall-Knight, who has a wide array of anti-gravestone cards, said zombies can easily counter this plant. 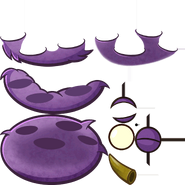 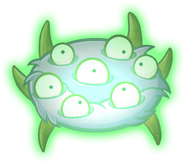 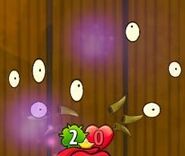 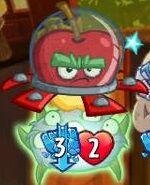 Espresso Fiesta being played on Eyespore

Frosty Mustache being played on Eyespore