. All other copies of that Plant also get -2

.
Sometimes the evolutionary tree withers at the root.
Extinction Event is a colossal super-rare zombie trick card in Plants vs. Zombies Heroes and a member of the

to play, and its ability gives a selected plant and all of its other copies on the field -2

Sometimes the evolutionary tree withers at the root.

for only 2 brains is already a cost-effective trick. And if there happens to be two or more of the same plant, this trick becomes even better. This trick is especially great against decks that rely on making multiple of the same plant, such as Pineclone, Snake Grass, Clique Peas (although it's better to use destroy effects on them instead), and Puff-Shroom swarm decks.

The Smash can use this so he can destroy all Pineclones on the field with a single Weed Spray, while Electric Boogaloo can combine this with The Chickening or Fireworks Zombie. However, playing two Extinction Events is cheaper, if possible.

It is also important to remember that, although they appear similar, the plants made by Pair of Pears and Shroom for Two do not count as the same plant.

While it isn't possible to stop your opponent from playing this other than by playing Brainana or having an Umbrella Leaf, having a diverse roster of plants or transforming cards is the best way to mitigate its effect. Bear in mind that its primary effect is still somewhat formidable, however. 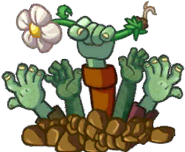