I need my TIME MACHINE!
Exploding Zombie is a conjectural name for this article.
If you know the official name or have a better name or
translation for it, please contact a wiki administrator to change it.

For the form in Plants vs. Zombies: All Stars, see Exploding Zombie.

After it comes into contact with a plant, it will detonate the bomb in its hands, killing many plants fatally.

Exploding Zombie doesn't know any Kung-Fu, so he had lived in Kongfu World, thinking he was inferior, until he found his talent with explosives and slowly gained fame.

Exploding Zombie (自爆僵尸; pinyin zìbào jiāngshī) is a zombie in the Chinese version of Plants vs. Zombies 2. He can be summoned by the Gong Zombie, Qigong Bronze, Gunpowder Devil, or come by themselves on the lawn. Any normal zombie who manages to touch a Weapon Stand that contains a bomb will transform into this zombie. When he comes in contact with a plant, his bomb will explode in a 3x3 area. Ice-related plants can disarm the bomb.

The Exploding Zombie dons a red bandana, covering a portion of his hair, only exposing the rear and half and pony-tailed part. Also, sweat leaves traces close to his right eye. He wears a red handkerchief that is tied up like a cape on his neck. For his torso, he sports on a blue and red colored long sleeve Chinese garment. Also, the left sleeve is torn off, exposing the elbow, then followed by that is a wrist band that is colored in red with yellow linings on front and rear edges respectively. His pants are colored in dark blue and is also torn enough to expose his left knee. Below his pants are bandages on both sides of the legs, further covering the pants, and finally a typical black shoe for his footwear.

You can use cheap plants, such as Puff-shroom or Sun-shroom as "cannon fodders" as a distraction to take out the bomb as well as the zombie himself. However, avoid doing this if other plants are within the bomb's exploding 3x3 area.

Exploding Zombie will not detonate the bomb when he encounters the force field from Infi-nut's Plant Food effect, instead stopping to eat it. So, planting an Infi-nut toward the front and using Plant Food on him is a good way to stop this zombie from hurting plants behind it.

If paired with at least five or ten Gargantuar Bronzes, Hammer Zombies, Gong Zombies, and Drinking Zombies, these combinations can be very problematic, emptying everything in your lawn. These zombies are the most dangerous during the battle with the Blade-Wielding Hero. 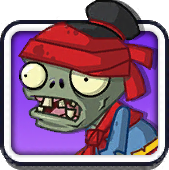 Exploding Zombie about to explode 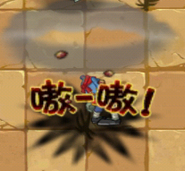 Exploding Zombie without his bomb

A Buttered Exploding Zombie without its bomb 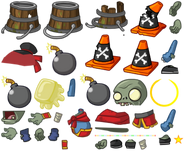 A shrunken Exploding Zombie with a bomb

A shrunken Exploding Zombie without bomb

A Exploding Zombie in Frosbite Caves (summoned by Blade-Wielding Hero) 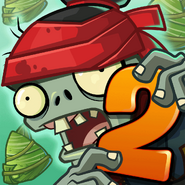 Exploding Zombie in the 2.2.8 icon 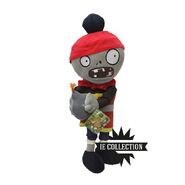 Exploding Zombie plush
Add a photo to this gallery

Retrieved from "https://plantsvszombies.fandom.com/wiki/Exploding_Zombie?oldid=2323982"
Community content is available under CC-BY-SA unless otherwise noted.