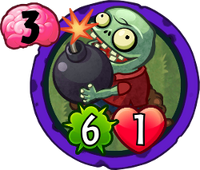 End of Turn: This does 1 damage to itself.
You could say he's an IMPlosives expert.
Exploding Imp is a premium rare zombie card in Plants vs. Zombies Heroes and a member of the

. He has the Gravestone trait, and his ability does 1 damage to him at the end of every turn, starting from the turn after he is revealed.

The word "Implosives" in his description is a portmanteau of "Imp" and "implosives."

You could say he's an IMPlosives expert.

Statwise, this zombie is a glass cannon. He is one-use in theory, as he will destroy himself regardless of whether or not he survived the turn he is revealed. His Gravestone trait does make him harder to remove and grants immunity to damaging tricks like Berry Blast, but you should make the most out of his single attack anyway.

Exploding Imp's ideal targets would be something with a lot of health and is a pain to remove otherwise, such as Soul Patch or Super-Phat Beets. He can also do heavy damage directly to your opponent.

For strategies inside the

Crazy class, Exploding Imp goes well with Valkyrie, as he will most likely destroy himself at the end of the turn. You can also play some mind games with your opponent and swap him out with Jester; since both have very different weaknesses, you could be in an advantageous spot if they guess wrong. Since Jester costs 3 brains as well, your opponent will have no way to know what was played.

As for strategies with other classes, each hero can use Exploding Imp effectively in their own ways:

Note that if you are using Zombot Battlecruiser 5000 or Electrician on the same turn as Exploding Imp, they must be played to the right of him, since gravestones are revealed from left to right.

Exploding Imp does a huge amount of damage to whatever is in front of him. Combined with his Gravestone trait, Exploding Imp is both dangerous and annoying. However, his biggest weakness is that he is usually a one-time use zombie due to his ability, meaning that all you have to do is to hamper or nullify his offensive power, at least for the turn he is revealed.

The quickest response for Exploding Imp is to play anti-gravestone cards, but you can try other methods if you don't have them. For example, Bog of Enlightenment can be played on Exploding Imp's lane, allowing more plants to survive his attack. Another method is to play Pecanolith, since Exploding Imp essentially becomes a 1-strength zombie that destroys itself at the end of the turn.

If you have none of these, you will have to sacrifice a plant if you don't want to be hit yourself; fortunately, any plant should do due to his self-harming ability. But if Exploding Imp is boosted to the point where he can last multiple turns, your only options will be instant removal and a "fighting fire with fire" type of gameplay. 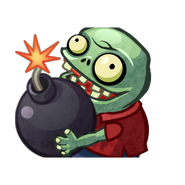 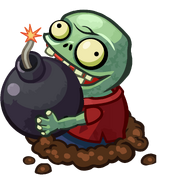 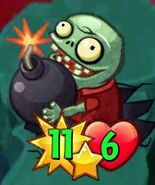 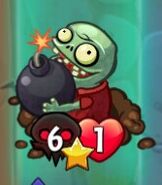 Exploding Imp with the 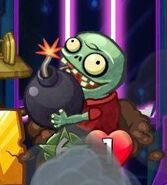 Exploding Imp with a star icon on his strength

Gigantic Exploding Imp on the field due to a glitch

Exploding Imp tinted gray due to a glitch 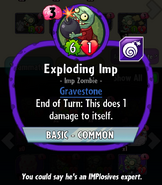 The player receiving Exploding Imp from a Premium Pack

The player receiving Exploding Imp from a Premium Pack

The player having the choice between Exploding Imp and Team Mascot as the prize for completing a level before update 1.2.11